The Metropolitan Museum of Art threw its annual Apollo Circle Benefit for the under 40 art crowd. 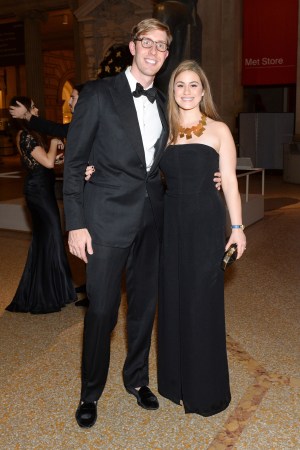 Thursday night saw the battle of the museum galas. While the Guggenheim was onto the second part of its two-night annual gala fundraiser some five blocks up, The Metropolitan Museum of Art drew its devoted young patrons to the Temple of Dendur for the Apollo Circle Benefit, profiting the Apollo Circle Fund for Art Conservation. This year’s gala was chaired by Lucy Jane Lang and Charlotte Van Dercook; the Apollo Circle is chaired by Sarah Chilton, Astrid Hill Dattilo, Genevieve Kinney, Alejandro Santo Domingo, and Laura Z. Stone.

The evening was unseasonably warm, giving guests a chance to leave their winter coats at home. Remarked one guest, “Last year I was already in my furs.” Plenty used the warm weather to get one final wear out of a brightly hued gown, which, when paired with the neon pink and purple lighting, made for the perfect selfie (though by now regulars know the lack of reception in the Temple.)

An event that in recent years has been sponsored by Carolina Herrera and, most recently, Maiyet, this fall’s benefit was without a sponsor, therefore nixing the traditional cocktail and opening straight into the party. Guests snaked their way back into the Temple of Dendur for drinks and dancing (Chelsea Leyland was perched atop the DJ booth, adding a dash of downtown to 82nd Street.)

The night was themed “Vice & Virtue” — to represent virtue, Guido Reni’s 1627 work “The Immaculate Conception”; vice, “Merry Company on a Terrace” from Jan Steen in 1670.

So what does the uptown art-loving crowd younger than 40 deem a vice? “Sugar. Anything chocolate,” said a guest. “Staying out too late,” admitted another, “and drinking too much Champagne.” “My vice is definitely buying decadent clothing,” said a young lady, before her friend lamented, “Why is it that everything we love is a vice?”