A flock of well-heeled Manhattanites braved the rain on Monday night for A Fool’s Fete, the charity's annual spring benefit. 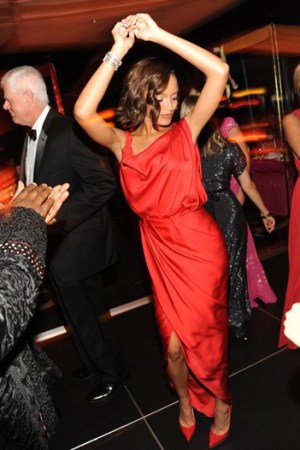 Despite some heavy April showers and gale-force winds on the streets, the spring dresses were out at the Mandarin Oriental Hotel Tuesday night for A Fool’s Fete, New Yorkers For Children’s annual spring benefit.

“I do New Yorkers for Children because I was once in foster care,” said Selita Ebanks, who had made an appearance on “Good Morning America” to promote the charity earlier in the day.

“About two years,” she explained. “And then my grandparents got grandparents’ rights. Because my mother’s an immigrant and [was] working to get a green card…”

It seemed that Ebanks’ life had touched a few more political hotpoints than most models.

“I’m trying,” Ebanks said with a laugh. “Give me five years.”

Ebanks was joined at the party by fellow models Karolina Kurkova and Crystal Renn; a host of socials, including Allison Aston, Maggie Betts and Arden Wohl, and a few figures who straddled both worlds, such as Byrdie Bell and Lily Kwong. Renn and Julie Macklowe formed a mini trend, arriving on the arms of the designer who had outfitted them for the evening — Zac Posen and Yigal Azrouel, respectively.

Naseeb Dance Group, a Bollywood-esque hip hop troupe, provided the evening’s entertainment, a booking that matched the event’s Indian theme (The host committee wore dresses by presenting sponsor Soigne K, care of the Indian designer Soigne Kothari.). After dinner, the dance floor was put to great use when the a surprising percentage of the crowd packed the space.

Wyclef Jean found partners in both Ebanks and Kerry Washington. The musician showed no signs of wear following his recent shooting incident in Haiti, grabbing the mic at one point to offer some live vocals.

Justin Tuck of the New York Giants, whose wife is on the New Yorkers for Children friends committee, made moves with his party on one side of the floor. Earlier in the evening he had taken a moment to explain how the NFL lockout was affecting his charity circuit schedule.

“I know how to fill that free time,” Tuck said. “I run my own charity, Tuck’s Rush for Literacy, we do a lot of stuff throughout New York City in the philanthropic areas so we know how to find things that fill up our time.”