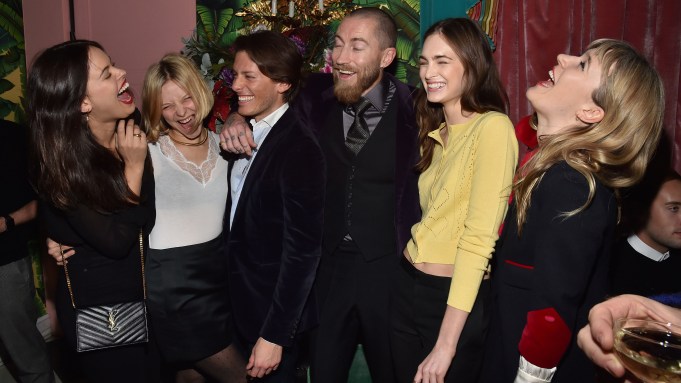 Not wasting a moment of fashion week enthusiasm, luxury e-tailer Mytheresa teamed with Aquazzura to host a cocktail party Wednesday night at Paul’s Cocktail Lounge in the Roxy Hotel. Edgardo Osorio, the brand’s creative director, and Justin O’Shea, creative and fashion director for Mytheresa, were joined by actress Jaime King and a bevy of “It” girls including Erin Wasson, Atlanta de Cadenet Taylor, Annabelle Dexter-Jones, Laura Love and Tennessee Thomas.

“It’s the most significantly on-trend, and realistically priced luxury brand on the market,” O’Shea said of the shoe brand. “That’s the gist of it.”

His fashion week plans include “drinking a lot and sleeping in,” he joked. “But I’m excited to see Altuzarra, Marc Jacobs, Calvin Klein — who else? Am I excited to see anything else? Oh yeah, Yeezy, because Kanye’s hilarious.”

His prediction for the much-discussed show spectacular, which begins Thursday at 4 p.m. at Madison Square Garden? “I think he’s going to sing some tunes, he’s going to pimp himself out and show stuff in a really weird way that no one could possibly comprehend,” O’Shea said. “And that’s what makes it so interesting. And just basically be like a showman, which I think is awesome.”