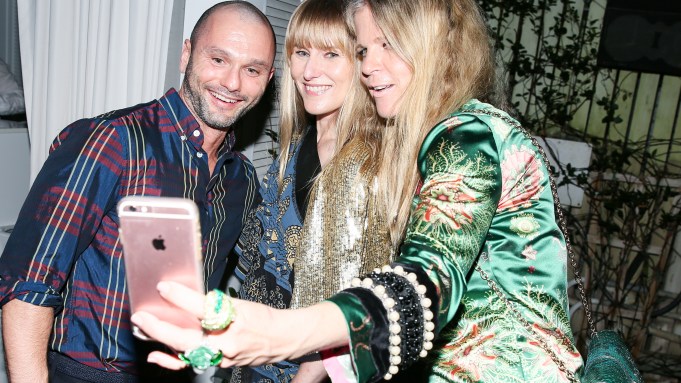 Her new gig clearly has its perks, like being able to make her maiden pilgrimage to Art Basel Miami Beach. She had already hit Faena Bazaar and Untitled art fair, where her husband, Christopher Astley, has a solo exhibit for Tracy Williams gallery.

“Right when I started, Giulio [Capua], our publisher, said, ‘We have to do something for Basel,’” said Astley, who immediately turned to Art Production Fund’s seasoned pros to hold her hand. “I’ll do anything with Yvonne [Force Villareal, the nonprofit’s cofounder].”

They cohosted the 10th edition of APF’s artist towel series but with a decor twist by turning John Currin and Laurie Simmons’ limited-edition works into enormous floor pillows for the event.

“They aren’t for sale, but people will probably want them. I mean, who wouldn’t want to sit on that?” said Force Villareal, who wore a Gucci minidress with velvet and pearl cuffs and her signature, costume cocktail rings. “They’re from a Manhattan shop — that’s my dirty little secret.”

Astley wasn’t the only Basel newbie. Laura Kohler still hadn’t been, though her family’s Arts/Industry program has invited hundreds of artists-in-residence to have free rein with Kohler’s mass-production foundry and kilns for decades, along with operating the John Michael Kohler Arts Center in Sheboygan, Wis. She sponsored the reception and seated dinner because APF shares the same essence of supporting creativity and innovation. Sadly, a towel would be her only new acquisition for the week.

“My husband isn’t with me, and we usually make those decisions together,” she said.

Lending a breath of non-industry air to the night were Kyle DeWoody, fashion designer Stephanie Von Watzdorf in full-on, pom-pommed Figue, her own line, and Colby Mugrabi the art world’s newlywed of the year who showed off her tan in a white, feathered minidress from Azzedine Alaïa.

“We were just in St. Barth’s,” she said, as Astley complimented her outfit and wise choice of footwear — the orchard setting isn’t kind to stilettos. “I don’t wear heels anymore.”