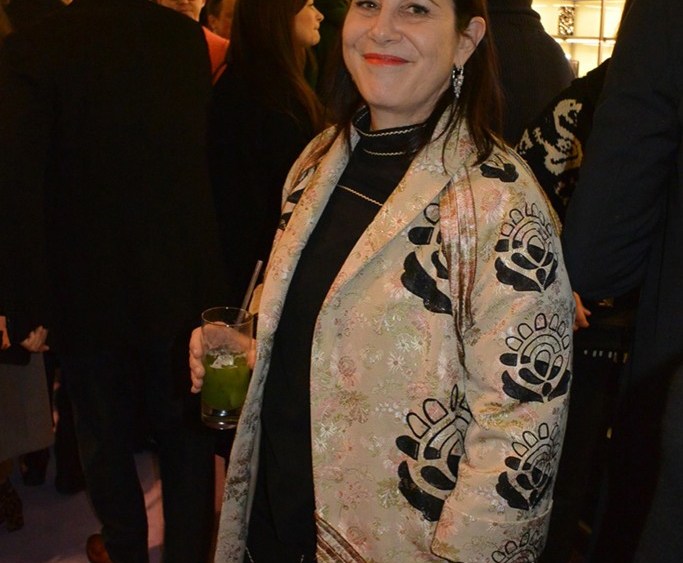 FREEDOM PARTY: Costume designer Arianne Phillips was given total freedom to take over the Prada store on Bond Street as part of the brand’s ongoing Iconoclasts project, which this season sees a trio of costume designers invited to reimagine flagships in New York, Paris and London.

Phillips, who created the costumes for “Kingsman,” said at the party to celebrate the collaboration, “[Prada’s] brief to me was ‘freedom, no rules’ and the thing about being a costume designer is telling stories and creating characters at the center of a film, so I felt like it was kind of a no-brainer that I had to work how I would on a film, so I decided to make one.”

Phillips developed her dreamlike concept for the short fashion film as an interpretation of Prada’s spring collection. The film is set in a barren, post-apocalyptic landscape, through which two almost-identical models drift past clouds of rust and lilac-colored smoke. “It’s kind of nonlinear, very surreal, like a dream. They could be aliens, they could be sisters, they could be the same person twice, and you can see they are mirror images,” she said.

The film was the basis for the transformation. Film stills of desert landscapes were used as backdrops on walls throughout the store, which had been carpeted in pale lilac. The store windows were filled with purple sand, rocks and trees, while moss and orchids were captured under glass inside the store because “when you put things under glass, like at the Natural History Museum, they become precious.”

“I’d love to do something like Arianne’s film for a music video, with all that lunar light and dreamy colored clouds from smoke bombs,” said Corinne Bailey Rae, who has an album coming out this year. “But, you know, I’d like to take myself out of it, make it less personal and just get a bunch of 20-year-old girls on the drums. But people expect to see you when you’re the artist.”

The installation will be featured in store until Tuesday. — Julia Neel, with contributions from Nina Jones