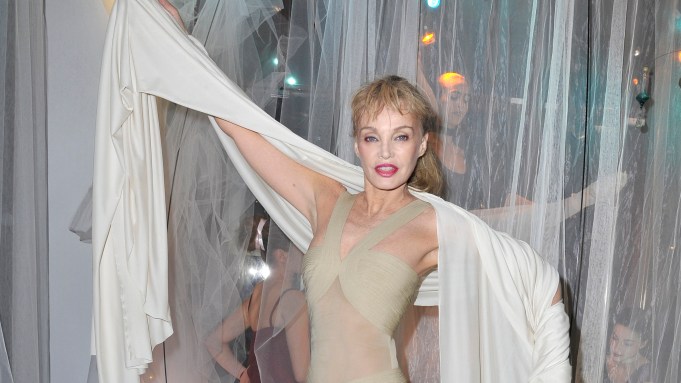 SCENT OF A SECRET: Arielle Dombasle — the French-American actress and singer — celebrated her new women’s fragrance created with Mauboussin at a pair of Parisian parties on Tuesday night.

Guests including Hervé Léger, Jack Lang, Jacques Grange, Pierre Commoy, Gilles Blanchard, Elie Top and Catherine Baba were in attendance, taking in the scent and perusing the artwork of Leonardo Marcos that was on display.

In the entryway hung giant photographs of Dombasle with the perfume, and a video of her was projected on to a wall. In one gallery window, visible from the Véro-Dodat passageway, young ballerinas limbered up.

When asked how the fragrance came to be, Dombasle said: “I’ve been doing a very special mixture for years. I put some base of Cuir de Russie — a little sample that Karl Lagerfeld gave me 20 years ago — then a hint of musk that I only find in New York, and some aromatic elixir, tuberose and iris. I was doing my own little mixture for years, and Bernard-Henri loved it.”

That would be her husband, the French philosopher Bernard-Henri Lévy, who was on hand also greeting friend after friend. “I just dreamed of having the formula made as my perfume. Everyone was always telling me: ‘Oh, you smell so good!’ And I’d say: ‘It’s my secret,’” Dombasle said.

She journeyed to Grasse, in the south of France where fragrances are made, and learned the various steps of the craft and met with perfumers. Afterward, her dream became reality.

Guests had a lot to say about perfumes in general. Inès de la Fressange, for one, is picky.

“I hate everything — I usually think that things are too violent, aggressive,” she said. The scents she loves (like her favorite, Mitsouko by Guerlain) are a mélange of “very rare and very good” base ingredients. “I’m totally square about perfume. It can’t be cheap. Like [with] shoes — it has to be very good quality,” she added.

Julie Depardieu is partial to woody perfumes, while Farida Khelfa adores musk notes. “I love perfume in general,” she explained. “I buy perfume even if I don’t wear it — just to smell it.” The Schiaparelli spokeswoman said the brand is currently working on a new fragrance. “Zut, Sport, Shocking, Sleeping — all of the Schiaparelli fragrances are so magical,” Khelfa said.

Fifi Chachnil, who “loves when a perfume tells a story,” wears her own creation, Fifi. She noted the parallels with song. “You speak about notes and about harmony,” said Chachnil. “I love the abstract work on it and the pure emotion you have to transmit when you do a perfume.”

The designer will be showing her lingerie collection to top clients while serenading them herself. “It’s either just piano and voice or guitar and voice or sometimes with a violin,” she said. “It’s very French and intimate.”

Chachnil will be stopping in Capri, Los Angeles, Egypt, Tokyo and Taipei. “It’s a mini world tour,” she said with a laugh, before heading off with a host of others to Le Secret d’Arielle’s second party — a sit-down affair at nearby restaurant Chez Macéo.