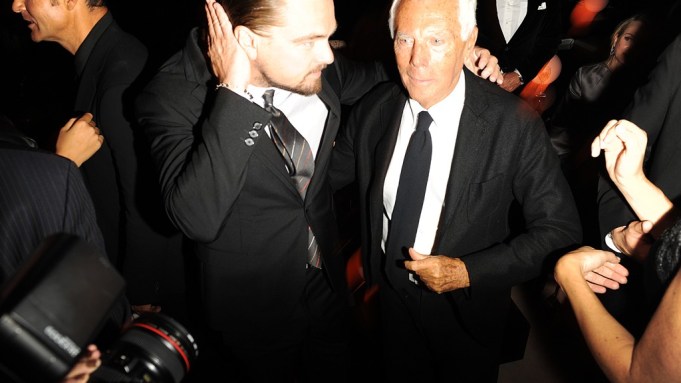 At Hudson River Park’s SuperPier on Thursday night, Giorgio Armani’s multitiered extravaganza known as “One Night Only” was apped off with a runway show and late-night after party. The runway show — all 47 minutes of it — showcased a selection from the designer’s Privé collections since 2005 grouped by their themes, such as Maharaja, Metamorphose, Hommage au Japon and Chine, followed by his fall couture collection. “I thought it was pure elegance,” Ellen Barkin said afterward, “And Mr. Armani always is.”

Bruno Mars’ “Locked Out of Heaven” thumped through the sprawling cream space, where guests plopped onto buttery leather banquettes or shimmied around their tables, topped with glowing globe-orb lights. Toward the end of the night, some particularly spirited partygoers took them home as party favors.

Daria Strokous headed towards the dance floor upon arrival, slinking through the sea of bobbing bodies to meet her model cohorts across the room where Jacquelyn Jablonski was shoveling a piece of burrata in her mouth. By the bar, Cory Kennedy wedged past Olivia Palermo, squired around by boyfriend Johannes Huebl, and headed for the door. Stephen Dorff sucked on an e-cig (though many openly smoked cigarettes inside) and hit the dance floor with Douglas Booth. Atlanta de Cadenet got grooving with bestie Laura Love nearby.

“There was this incredible silver outer space-looking suit that looked like it was made of metal panels,” de Cadenet, taking a quick break between songs, said of her favorite runway look from the evening. “I kind of really want it.”