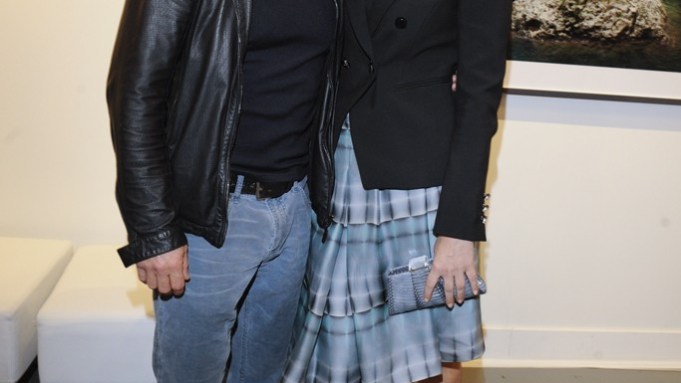 Giorgio Armani and Sean Penn reteamed Thursday at the opening night of Paris Photo to raise funds and awareness for the actor’s J/P Haitian Relief Organization. Taking place in Los Angeles for the first time, the glitzy art photography fair at Paramount Studios corralled the world’s top galleries plus a special section dedicated to an exhibit conceived by Armani and Penn, “Acqua #3,” a series of Jim Goldberg photographs taken in Haiti last month.

“There are a lot of holistic needs in Haiti but nothing is more important than clean water,” said Penn. “Jim took the time to work with us in Haiti and it’s great for people who haven’t been there yet to see one person’s expression of the experience.”

There was plenty more to see in the two soundstages that had been transformed into massive galleries for the fair. As Josh Duhamel and Fergie browsed around, Penn personally checked in.

“We’ve got our eye on one,” replied Duhamel.

“You ought to get one of yourself,” Penn joked.

“Yeah, it’s the only thing that would keep his attention,” deadpanned Fergie.

“Any conscious-raising to me is a plus,” said Sedgwick. “Environmental disaster is the new norm, so it’s wonderful that someone like Sean can create a template for how to deal with it.”

Later, some of the crowd convened at Mr. Chow for a private dinner in collaboration with Vanity Fair, where they were joined by Amber Heard, Vanessa Getty, Emma Roberts, Rachel Zoe and Kelly Patricof. Roberts and her date, “Adult World” costar Evan Peters, found the din to be almost as overwhelming as the Tribeca Film Festival, where their movie just premiered. “The noise is just bouncing off the walls, so it’s really hard to concentrate,” she said. Instead, she focused on sipping the martini she was sharing with Peters, a charity dinner newbie. “I’ve never been to one of these things where they ask you for money. What’s the protocol? Like 20 bucks or empty your wallet? I hope I don’t end up giving away my house,” he said. As it turned out, Giorgio Armani made a $500,000 donation to J/P HRO, thus avoiding the call-out for on-the-spot collections, but Penn did take 15 minutes to speak to guests about his organization.

“I know a lot of you don’t know why you’re here, but I’m going to explain it to you,” he began. He ended by calling for people to bid on the photographs for auction. “It will make the night more successful, it will help Haiti, and you can put it on eBay. I won’t get mad; in fact, I encourage it. You can get a higher price and give us a little piece of that.”