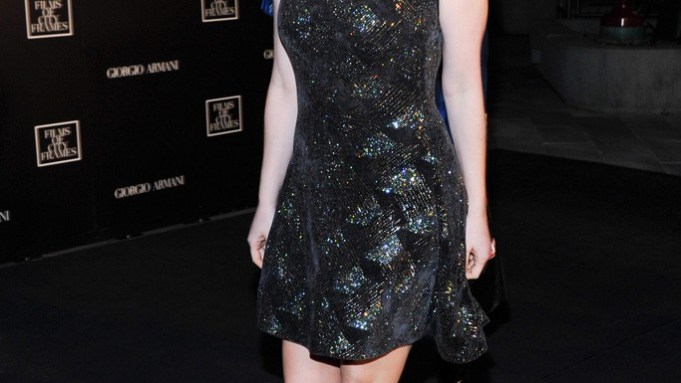 On Saturday night, Team Giorgio Armani commandeered Toronto’s 147-story CN Tower, to toast “Films of City Frames,” the house’s new film initiative featuring six short student films. The circular skyscraper was surrounded by black carpet, and staff clad in all-black directed guests to the elevator that led a viewing gallery to take in a 360-degree panorama of the city.

“It’s awesome,” marveled Elisha Cuthbert, a native Canadian. “I think to have Armani here and to be in the iconic CN Tower is fabulous. It’s more than a tourist attraction. It has the best, incredible views of the city, so it’s a no-brainer,” she said.

Director Edward Zwick was decidedly less impressed. “How can you tell [where you are]? You’re just surrounded by people in dark suits,” cracked the filmmaker, who appeared to avoid all windows as he schmoozed inside.

The director will premiere his film, “Pawn Sacrifice,” on Thursday night at Roy Thomson Hall. “I have to say that I made three movies with Denzel Washington and I’ve worked with Leonardo [DiCaprio] and Tom Cruise and Daniel Craig, so it’s just another day at the office,” he said of directing Tobey Maguire as chess champ Bobby Fischer. Washington showed up to the evening fete to support his pal, as did Laura Dern, Holly Hunter, Melissa Leo and Jessica Chastain, who spent the entire night chatting with Chloë Grace Moretz at a table overlooking the city. While Giorgio Armani remained abroad during the festivities, his niece and cohost Roberta Armani relayed, “I called him in the taxi. He’s very happy. He said, ‘I’m very proud of the kids.’”

At the Windsor Arms Hotel, “It” boy Benedict Cumberbatch held court with Ben Stiller, Steve Carrell and Mark Ruffalo on the outdoor patio at a joint party by the Hollywood Foreign Press Association and InStyle magazine. Shockingly, few — if any — females surrounded them, although plenty strolled through the event, including Greta Gerwig, Anna Kendrick, Laura Dern, Jessica Chastain and Salma Hayek, one of the few who didn’t stay past midnight. “It was a good party,” insisted Hayek. “Unfortunately, I have to work early.” Naomi Watts was just getting started on the red carpet. She screamed and ran over to hug Ruffalo and then jokingly vamped, “Now move out of my way” as she posed for photographers.