Armarium Chalet Pops Up at the St. Regis 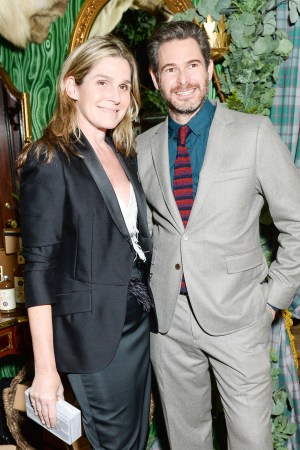 On Thursday evening, the latest way to get decked out for the holidays arrived on the Upper East Side. Alexandra Lind Rose and Trisha Gregory’s newly launched business, Armarium, debuted its Armarium Chalet at the St. Regis. Tamara Mellon, Nina Garcia, Claiborne Swanson Frank, Meredith Melling Burke, Indre Rockefeller, Kelly Rutherford, Genevieve Jones, Kara Ross and Gigi Burris ducked in to see the offerings from the new venture, which allows clients to borrow high-end brands (an upscale Rent theRunway, if you will).

Armarium officially launches in the spring, but a soft opening for the holiday season was too good to pass up. Lind Rose and Gregory recruited pals Bronson van Wyck and Aerin Lauder to spruce up the Cognac Room at the St. Regis for a full-force holiday pop-up, dubbed the Armarium Chalet. The Chalet will operate out of the Upper East Side St. Regis through Dec. 24, after which it will move, fittingly, to Aspen’s St. Regis, for all fur-and-sparkles New Year’s Eve needs.

The Chalet will serve as a space “where people can borrow an amazing piece to wear to a holiday party, to host a holiday dinner, or just anyone coming through New York for the holidays that may be staying at the St. Regis or a neighboring hotel to get access to these brands that they may not see in their hometown,” Gregory explained. The company, which counts former W magazine editor Karla Martinez as a style consultant, will debut a mobile app in the spring.

Armarium aims to dress women in “something you wouldn’t necessarily want to wear again and again, or own…statement pieces, that finale piece on the runway, look 37 that you can’t get your hands on,” Gregory said.

The Chalet is well stocked with festive offerings, including an eggplant high-neck ruffled Erdem dress and a Prabal Gurung fur vest, with Gregory’s favorite look being a black embroidered Peter Pilotto dress. Other seasonal goods like Aerin beauty products and cocktail mixing supplies are also on site.

Gregory’s pick for the perfect holiday bash outfit? “A slim trouser and a crazy beaded jacket that weighs 30 pounds and is obnoxious,” she said.