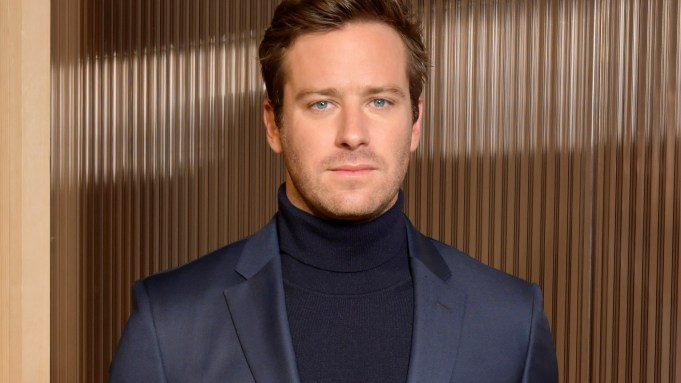 “My first fashion memory is probably penny loafers that my mom gave me, embarrassingly enough,” said Armie Hammer at the Hugo Boss show on Wednesday. He added that he was “probably five or six” when he received the pair of shoes, which came complete with an actual penny in them.

The “Call Me By Your Name” star sat next to his wife, Elizabeth Chambers, in the front row at the early afternoon show. Fellow actors Jay Ellis of “Insecure,” Dylan Sprouse, Sebastian Stan and Patrick Schwarzenegger sat nearby, as overly eager photographers tried to get their shots in before the show.

“I have a couple of good fashion memories,” said Sprouse. “I guess the one that comes to mind immediately is when I finally actually started to enjoy it. That was around when I moved to New York City.” The Disney alum came to NYC in 2011, when he started as a freshman at New York University.

“Coming from my sort of weird suburb, it was cool to see the different walks of life and really the exploration,” he continued. “I’m very inspired by the Japanese New Yorkers, [who] seem to have the sickest style.” Where else does he draw style inspiration from? “I love World War II British pilots. I like military attire. I get inspired by that. I just have an L.A.-meets-New-York style.”

Ellis recalled his first fashion memory, which was courtesy of his uncle from Sacramento, Calif. “Don’t know if that’s the fashion capital of anything, not even Northern California, but he would always show me what belt should go with what shoes, what pants,” he said. “I think that was my first time of someone actually telling me, ‘This goes with that.’ Just an understanding of how things work.

“I probably was eight when he told me for the first time,” he continued. “He actually lives in New York now and he’s a very stylish dude.”