A dinner was held on the palazzo's rooftop, which contains the terrace of the new Zuma restaurant. 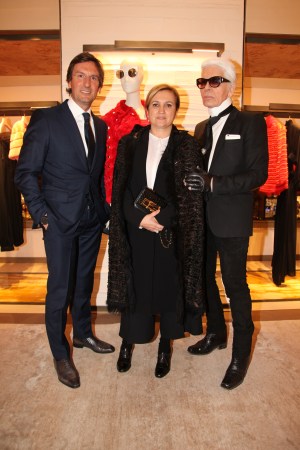 ROME — You could call it the Royal Table of Fashion.

Bernard Arnault with his son Alexandre, Karl Lagerfeld, Kendall and Kris Jenner and models Lindsey Wixson and Ming Xi were all united around a table on the rooftop of Palazzo Fendi, which contains the terrace of the new Zuma restaurant. The restaurant opened its doors Thursday night just in time for the event.

“It was amazing,” said Kendall Jenner, referring to the restaurant’s food. Actually, the model had an intimate pre-dinner at Zuma with her mother, while the other guests were still checking out the two floors of the revamped Fendi flagship.

“This is just great and it really reflects the image of the Fendi brand,” said Lagerfeld, praising the project developed by the Roman fashion house. “I’m leaving tomorrow, but I wanted to stay at least one night in one of the suites.” Along with housing the store and the restaurant, Palazzo Fendi contains seven exclusive hotel suites.

Keeping her usual low profile, film director Sofia Coppola also attended the event. “I’m doing a project with the Opera House here in Rome,” she said. Coppola will direct a production of “La Traviata” from May. Valentino Garavani, as well as Valentino creative directors Maria Grazia Chiuri and Pierpaolo Piccioli, will design the costumes.

Several generations of the Fendi family flocked to the new palazzo, including Silvia Venturini Fendi’s daughters Leonetta Luciano Fendi and Delfina Delettrez Fendi. “We are unveiling a special jewelry project in a couple of weeks, which will be very innovative, but also rooted in the tradition,” said Delettrez Fendi, who will also launch a couture jewelry collection in Paris in July.

In addition to an array of Rome-based actors — including Ornella Muti, Claudio Santamaria, Alessandra Mastronardi and Katie Saunders, who is said to have a new comedy out at the end of the month — the Italian fashion industry was represented by Carlo Capasa, chief executive officer of Camera Nazionale della Moda, and designer Marco de Vincenzo.

The former gave a lecture at Rome’s Università della Sapienza earlier in the day, while the latter arrived straight from the Fendi offices, where he designs accessories. “I’m already working on the new collection and this weekend will be dedicated to searching new fabrics,” said de Vincenzo.

“This is a job for healthy, spirited people because the rhythms are intense,” said Venturini Fendi. “But honestly I cannot complain; it’s exciting.”