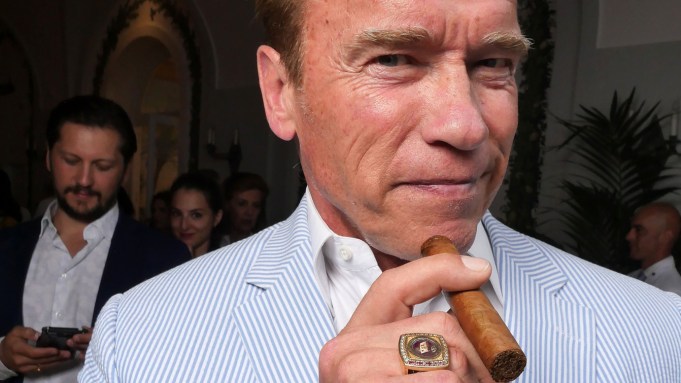 Who knew Arnold Schwarzenegger was so light on his feet? Joining industry movers and shakers at the Charles Finch Cannes Filmmakers dinner on Friday at the Hôtel du Cap-Eden-Roc in Antibes, France, the former governor of California chose dancing with Sylvester Stallone as one of his favorite memories from Cannes.

“We danced the waltz,” said Schwarzenegger during the cocktail, dressed in a seersucker jacket, pants and Adidas sneakers. “It was 1991, I believe. Sylvester was here for a film, and I was promoting ‘Terminator 2: Judgment Day,’ and up until that point we didn’t really hit it off well. We were very competitive and trying to derail each other at every angle and every possibility. And then, somehow, because we were working for the same company, we hugged at a party right about here. The Gipsy Kings were playing and we were holding onto each other and they said, ‘Do you want to dance?’ and he says, ‘Yeah.’ And so we were dancing, we were waltzing, around and around and around. Then we all of a sudden stopped and he said, ‘God damn it, you’re leading, I hate that,’” laughed Schwarzenegger who is in town to promote the feature documentary he narrates: “Wonders of the Sea 3-D,” codirected by Jean-Michel Cousteau and Jean-Jacques Mantello.

Mingling by the bar backdropped by a view of the crashing sea, actress Olga Kurylenko checked out the images from the photographic exhibition “The Art of Behind the Scenes,” including a shot by Douglas Kirkland of Charlie Chaplin and Sophia Loren on the set of  1967’s “A Countess From Hong Kong.”

“You go to Charles’ dinner and it’s family. It’s a chance to catch up with people because we’re all constantly traveling, we’re all working,” said the actress who is in town to promote the comedy “Salty” with Antonio Banderas and has just wrapped filming Terry Gilliam’s “The Man Who Killed Don Quixote.” “I play the wife of ‘The Boss,’ the character played by Stellan Skarsgård. She’s basically a very rich woman who enjoys life and is after the main character, so in the film I’m trying to seduce Toby who is played by Adam Driver,” she said. “The last scene was great. It was a bit of an action scene, actually, that’s why I asked Elie Saab for a jumpsuit. I was, like, ‘Guys, I need something very long, I’m covered in bruises. Look, I just came out of a battle.”’

Coco Rocha entered the party from the windswept terrace where she’d been taking family photos with her husband, muralist, interior decorator James Conran. Sporting a Twenties-style hairdo to match her Chloé dress, Rocha had some beauty tips to share. “We just did some great photos downstairs, and let’s just say my hair held it together; his did not. All I have to say is hairspray, hairspray, hairspray,” said the model who’ll be walking in Carine Roitfeld’s “The Golden Age of Hollywood” show for amfAR at the Hôtel du Cap-Eden-Roc next Thursday.

Despite so many bigwig producers circling at the party, a film career is not on the cards, she said. “I’m not the greatest actress as in, like, speaking. I think modeling is kind of a silent form of acting, but when you give me lines, I just can’t remember anything. I’m the worst. If you ask me to say a famous phrase like, ‘Maybe she’s born with it,’ I’ll say, ‘Because she’s worth it.’ Unfortunately no, I will probably never go into acting.”

At Home With Monica Bellucci >>

Cannes Film Festival Photos Through the Years: From Grace Kelly to Jack Nicholson >>