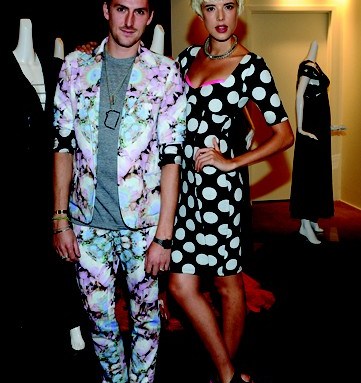 Christie’s is generally more a bastion of upper crust bidding than pork pie hats and smudged eyeliner, but Thursday evening seemingly half of Williamsburg and the Lower East Side descended upon its galleries for a private preview of its upcoming auctions, including “Resurrection: Avant Garde,” which will take place in London on Oct. 30. As partygoers like Genevieve Jones, Peaches Geldof (who will be making the show rounds with Nylon Magazine), Yigal Azrouel and Chiara Clemente admired the Paco Rabanne and Rudi Gernreich on display, adventurous dresser hosts Agyness Deyn and Henry Holland were so besotted with well-wishers in the bottlenecked entrance they could hardly check out the goods. “I don’t know which is my favorite — I’ve barely been able to look at anything,” said Holland, in town to show editors his spring collection, a dress from which Deyn modeled for the evening. Nearby, Kelly Osbourne had other shopping pursuits in mind. “I’m going to shows this week to look for things I like for my new Fox TV show ,” she explained. “That way I don’t have to pay for my clothes.” Afterward, Osbourne and a group of editors, Christie’s folks and fashion designers joined Holland and Deyn for beef salad and fried rice at Indochine.