The fair had its vernissage on Wednesday, and that evening was a blur of pop-ups and dinners and celebrations for new artist collaborations. 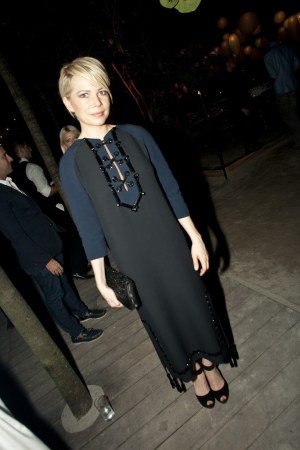 Why go to Art Basel Miami Beach? The question seems self-explanatory on its face.

“The weather, the water,” mused a wistful Pharrell Williams, the singer and producer.

Williams was at a dinner Wednesday at the Raleigh Hotel being held by Louis Vuitton for the Charlotte Perriand beach house it had installed in the hotel’s backyard.

“It used to be the weather, the water and the women, but…” he paused and pointed to his wife, Helen Lasichanh. “I’m good.”

Gerard Butler can still indulge though, and the titillating combination of art and sex appeal is what brings him back year after year, though this time around he’s been on a tight leash because of competing professional projects outside of the Basel bubble.

“Other than the Roger Dubuis event, I haven’t really had a chance to sample either ass or art,” he said. The actor was at a dinner presented by the watchmaker — he is its brand ambassador — at the W hotel that was coming to its conclusion a few hours after Vuitton. Butler was disappointed this time around he wouldn’t get to experience the local delicacies. After several trips, he felt he had finally figured out how to navigate a nutty week like this in Miami, characterized as much by its guilty pleasures as by its missed opportunities.

“I’m enjoying Miami more each time as I learn how to work it better,” he said.

The international party circuit relocates here for its annual end-of-year binge every December for a stretch of time that rests entirely on your tolerance for expensive art, overcrowding, overconsumption and sponsored swag. Basel has become a bloated affair that on any given night offers an abundance of options for jet-setting collectors as well as incorrigible party-crashers. The actual fair, the nominal reason most people travel here, had its vernissage on Wednesday, and so that evening was a blur of pop-ups and dinners and celebrations for new artist collaborations, each greeted at the door, no matter how low-brow the event, by a scrum of rubberneckers hoping, pining to go in. They were there at the free-for-all that was an auction for Lady Gaga’s Born This Way foundation (the Lady wasn’t) and at the hard-to-crash pop-ups for roving clubs Le Baron and Chez André.

Amid the blur, some scenes stood out: Kim Kardashian and Kanye West, the week’s most coveted RSVP, arriving shortly after midnight to a scene at the Delano hotel for a party by Tommy Hilfiger, Tony Shafrazi and DuJour magazine founder Jason Binn. By the pool, Val Kilmer was taking selfies.

At the dinner for Dubuis, at the nearby W, Challenger, a live American bald eagle, greeted guests as they walked in. A long stream of cabs and black cars ferrying delicate flowers like Kristen McMenamy, Amanda Hearst and Simon de Pury through a construction zone to the unfinished Perez Art Museum Miami, still under scaffolding even as W magazine and Vionnet feted its opening.

The Vuitton dinner at the Raleigh was removed from all the noise, as Zen-like as the inside of Perriand’s beach house, which could only be toured, even by Delphine Arnault, wearing protective booties. The dining table centerpieces were small batches of multicolored roses, lined back-to-back like a hedge.

“I’m not going to go to lots of parties or anything. I was just happy to see some art,” said Michelle Williams, a Basel first-timer. She had toured the fair earlier and was taken with an Allison Neil painting, though she is not herself a collector. “Not in the way that people in the arts today are collectors. I’m more an iPhone collector, collecting images.” The fair, museumlike in its scope, seems like an ideal venue to teach children about art, but Williams’ daughter had not tagged along for this short trip.

“It’s not hung at the right height for her,” she said.

Cindy Crawford, who came with husband Rande Gerber, was waiting for a glass of tequila — Casamigos, natch, given her husband owns it. Her advice to the newbies: Get a sherpa, or just do what Aby Rosen tells you to do.

“It’s good to be with people who really know art otherwise you can be overwhelmed,” she said.

Loitering around at the dinner were also Elle Macpherson, Alexia Niedzielski, Diana Picasso, Neville Wakefield, Chez André’s André Saraiva and Miami developer Craig Robins, who was deep in conversation with Pharrell Williams. “Because it’s our first time we just did what our friends said,” Crawford continued.

Williams has danced to the fast-moving Basel bebop enough that he knows how to pace himself. “You can’t be in 3000 places at once,” he said. He finished dinner and sauntered to the mainland for a party he curated with Takashi Murakami. Doors opened at 11 p.m. Williams went on a little after 1 a.m., performed his two recent hits, “Blurred Lines” and “Get Lucky,” and disappeared from the stage in less than 20 minutes.