HONG KONG–“Tenacious,” said Adrian Cheng, that’s what you have to be to get through art week. It was the evening of March 20 and the Chow Tai Fook-heir and K11 Art Foundation chairman was hosting a MOMA pop-up exhibition.

All true, except that”art week” was a bit of misnomer. Cheng had already been hosting events over the weekend in addition to the champagne-fueled line-up during of exhibitions, parties and events coinciding with the Art Basel fair.

Earlier that day, Sir Michael Craig-Martin unveiled a new installation “Bright Idea” The Peninsula hotel. While Craig-Martin is often called the “Godfather of Brit Art”, he credited Johnson Chang of the Asia Art Archive for nurturing a movement here. “I came to Hong Kong first in 1976 and at the time I met Johnson Chang and now he’s become such an important person,” Craig-Martin said. “There was no contemporary art in Hong Kong at that time and he’s really the father of what’s happened here.”

It wasn’t the only grand hotel hosting an art exhibition. Across the harbor, the Mandarin Oriental and auction house Phillips had Andy Warhol photos on his display from 1982 trip to Hong Kong and China.

“I could see my apartment in one photo,” Dee Poon, daughter of Harvey Nichols-owner Dickson Poon, said pulling out her phone to show her own snapshot of the vintage photograph. “I still live there.”

On Tuesday, Petra Collins was hosting the traveling A Magazine exhibition featuring her photographs. Clad in an one-shoulder gown, she walked around the space with her hands clasped. “Wow,” she said. “Sorry, it’s the first time I’ve actually seen it.”

The photographs–taken on film, which is the only medium she works with–of her extended family were taken in Hungary.

“I’m from Canada but my mom is a refugee from Budapest,” she explained. “I do still speak Hungarian. My sister and I would go back every summer and would be immersed in Hungarian culture.”

She also gave her opinion on the political situation in the U.S. currently. “I hope things will change and I think a lot of people are working towards that right now. Coming from a family where my mother is a refugee, my dad is an immigrant. It’s just crazy what is happening.”

Over at Art Central, Nadja Swarovski was espousing on the importance of being positive.

“I always not try to look at anything but just catch the vibe,” she said at a Wednesday luncheon. “Because to me, art has either a positive or negative vibe. I also believe to have positive artwork in your environment, it shapes your psyche, the way you do business, your being.”

Swarovski had Japanese artist Yuri Suzuki create a sound installation, a highlight of the fair. The public could stand inside the mechanical crystallophone consisting of 16 brass and crystal structures and move their bodies about to produce sound.

Swarovski also raved about CJ Hendry, the artist who partnered with Christian Louboutin for a colorful interactive exhibition which saw gallery goers scribble with Louboutin heel-shaped crayons to the walls.

“She is totally amazing, I think we need to watch her because I think with that energy and spirit of hers, she will definitely excel,” she said.

Elsewhere at Art Central, there was special NikeLab artist collaboration. Called The Vision-Airs, it celebrated the 30-year legacy of the Air Max shoes and invited six artists including Feng Chen Wang, Wan Bing Huang and Jourden to present their take on the idea of their new Vapor Max shoe.

Also in a rare occurrence, the legendary artist Christo touched down in the city this week.

“He came for the very first time to an art fair which he assured me he hates,” said his dealer Mathias Rastorfer, ceo of Galerie Gmurzynska. The 81-year-old artist, who first visited Hong Kong in 1969, was in high spirits at a private dinner held in his honor after the vernissage of the fair at rooftop restaurant Sevva. It was attended by friends of the famed Swiss-based gallery including Diana Widmaier-Picasso, granddaughter of Pablo Picasso.

The next day Christo delivered an animated talk to a packed audience at a local university. “Aging is very good for artists,” he said. “It’s not the patience but it’s passion [that kept me going].” Turning philosophical, he exclaimed, “I don’t like piousness. Art should be forceful, dramatic, energetic, all these things!”

Other than Christo, the talk of Basel was virtual reality. Google Arts and Culture collaborated with the fair for the first time, inviting five artists to use virtual reality painting app Google Tilt Brush to create pieces that viewers could walk through, teleport and zoom in and out of. 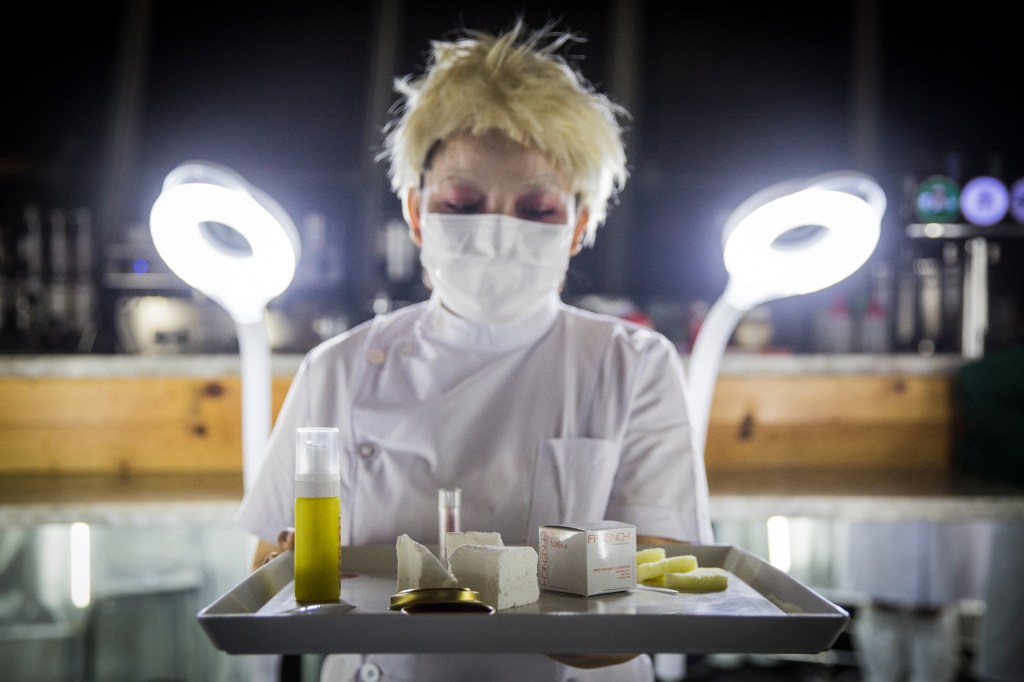 In a week that can also be full of tedious, staid dinners, Thursday brought some relief when London cool girl Isamaya Ffrench teamed up with Bistrotheque for a dinner overlooking the harbor. It was a meal where the age-old wisdom “do not play with your food” was completely thrown out the window.

Riffing on the modern-day obsession with cosmetic procedures, Ffrench had everything at the dinner appear as if it was makeup or some kind of self-enhancing tool. Servers donned clinical outfits and surgical masks pouring wine into science beakers. Pudding was pulled out of a foundation compact box and lipstick-shaped chocolates were had for dessert.

Back at Basel, explosives master Cai Guoqiang was accompanied by Wendi Murdoch and her youngest daughter Chloe, after a screening of a documentary about his work. Although “Sky Ladder: The Art of Cai Guoqiang” was released last year, it still has yet to be shown in mainland China where films are closely censored.

The good news, Cai said, is that the movie finally got approval to be shown in his homeland. The bad news is that the “tense parts where I was having difficult discussions with the government were completely cut out. Nothing is perfect,” Cai said. The artist has worked to create impressive firework displays at the behest of the government, such as for the Beijing 2008 Olympics and the APEC summit in 2014. While there’s been friction with the authorities, he said “involving officials is not a bad thing because by involving them, they can get to know what artists are doing.”

That being said, the Chinese art world just lost one of its great young photographers, Ren Hang, at the age of 29, an artist whose sexually explicit work drew the ire of Chinese government censors and resulted in his arrest. “I feel terrible about the suicide and everyone should keep healthy,” Cai said, “but without some problems you cannot be a good artist. You have to find a balance.”