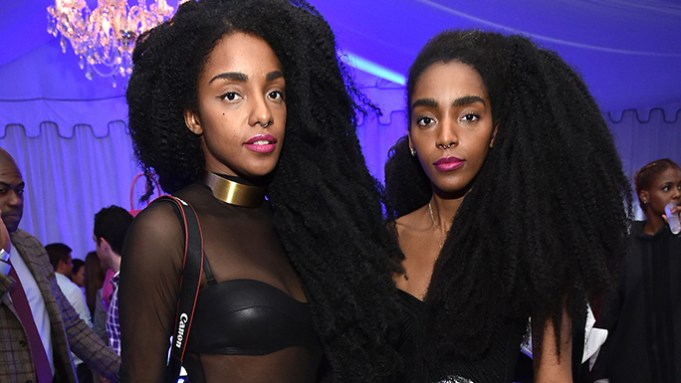 Please, no rain. That was the main thought on everyone’s mind as they headed into their Friday festivities after the previous night’s deluge. Rosario Dawson came prepared to host the 6th Annual Bombay Sapphire Artisan Series with Russell and Danny Simmons’ Rush Philanthropic Arts Foundation in an oceanside tent during Art Basel Miami Beach.

“This time I wore my Lanvin flats and can wade in water up to here,” she said, placing her hands where her Shoshanna sequined micro romper hit her thighs. “I know other women are in beautiful heels, but sometimes you have to be practical. I’m ready for it.”

Luckily, the rain never came, and the party went off as planned with Dawson revealing the national grand finale winning artist, Aron Belka from New Orleans, among 12 finalists whose works were exhibited for attendees like Solange Knowles, Beyoncé’s stylist Ty Hunter and models Shaun Ross and Garrett Neff. As a judge, Danny Simmons had to slog through 10,000 entries.

“The program’s work is getting stronger, and we’re seeing older artists participating and taking it more seriously,” he said, also noting a figurative art trend.

The event stood out from the typical Basel drill for its looser vibe and music connection, such as Miguel, who came fresh from recording a track with Argentine band Illya Kuryaki and the Valderramas in Miami earlier in the day.

“I performed here last year, and it was so fun that I returned as a guest,” he said.

Dawson had the opposite scenario: she had such a good time as a guest, she volunteered to became a creative mentor who will collaborate with Belka on a public mural next year.

“I grew up in New York, so murals are everything to me because they aren’t visual pollution,” she said.

ACRIA and Paddle8 kicked off the HIV/AIDS organization’s 20th anniversary holiday fund-raiser in New York — which takes place later this month — early: on the Miami Beach Edition’s terrace, guests sweated out the week’s toxin overload in steam room conditions. The family-style spread also was a chance to thank artists like Ryan James MacFarland, who donated a large-scale C-print of a nude male torso for the auction.

“I’m a sucker for technique and can tell when someone really gets his craft like Minoliti’s beautiful brushstrokes,” he said.

Wishing he could buy more art, Thorsun swimwear designer and Basel regular George Sotelo was most impressed with Pulse fair.

“I had a Chuck Close sighting there, and I have to admit that I was a little starstruck,” said Sotelo, who owns a Kate Moss photo by the artist. “I bought it five years ago, and it’s probably the best investment I’ll ever make.”

While Sotelo attended the inaugural Basel in Miami, Bret Easton Ellis finally took the plunge this year, and as a guest speaker during the fair’s Conversations program to boot. Besides being plain curious after hearing so much, he attended as the perfect press launch pad to announce his collaboration with Los Angeles artist Alex Israel for an exhibition that opens at Gagosian Gallery in Beverly Hills in February.

“I’m just happy to be able to talk about it since we had to keep it under wraps for a year,” said Ellis, who wrote the text to accompany Israel’s images for 20 paintings. “It was a lot harder than traditional writing because that I do alone, whereas a collaboration involves someone else’s ideas.”

As he surveyed the crowded dance floor at Surface’s closing party inside the W Miami Beach, which he hosted with Israel, Hans Ulrich Obrist, Bettina Korek and the magazine’s owner Marc Lotenberg, one had to ask what the chronicler of excess thought of the contemporary art world compared to the Eighties.

“There’s so much more money today. I don’t remember paintings going for $140 million or emerging artists’ works selling for tens of millions of dollars,” said Ellis, adding he couldn’t afford any of it (though his fortunes may turn around after his show). “Was art more tactile, more real then?”

An exhausted Lotenberg was on his seventh and final event of the week that drew die-hards like Lenny Kravitz, Julian Lennon, China Chow, Spencer Bailey, Sarah Arison, Almine Rech, Simon Castets, Bernard Ruiz-Picasso, David Adjaye, Robbie Antonio and Francesco Vezzoli. He willingly bit off more than he could chew so the brand would be fresh in advertisers’ minds when they planned their campaigns in the coming months.

“We wanted to prove that we’re going to the next level and what we’re capable of doing,” he said, looking forward to recuperating on his Kenya safari. “Eden and I are going on our honeymoon in two weeks.”