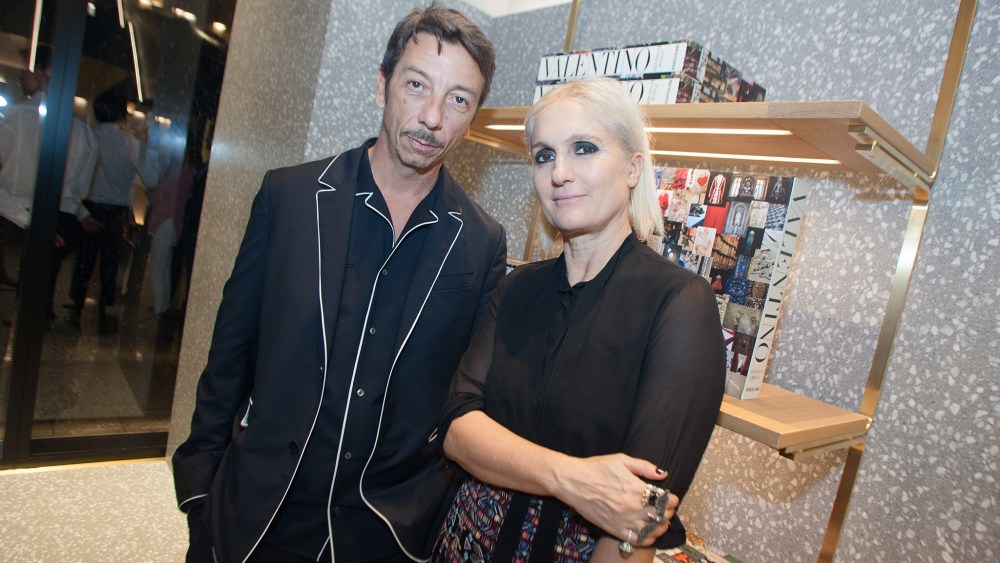 Valentino’s creative directors Maria Grazia Chiuri and Pierpaolo Piccioli were in Miami for Art Basel for the first time as part of a mini U.S. tour this week — the trip was bookended by a Goop event and a Lincoln Center benefit in New York. They dreamed up a labor intensive collaboration with Roman artist Pietro Ruffo, for which he worked up an enormous carved birch structure, inspired by the set he did for Valentino’s July couture show in Rome. “Maria Grazia and Pierpaolo asked me to make a new installation bringing two desks together, one with seamstresses and one with artists who work together,” said Ruffo, standing on the structure that was positioned outside on Palm Court near the Valentino store in the Design District Thursday afternoon. Two seamstresses from Valentino’s Rome atelier were sewing dresses live while a few artists from Ruffo’s studio were cutting, painting and pinning 3-D camouflage over an 18th-century map of Rome as part of a performance piece to show that art requires patience and time. In this case, the installation also required fairly clement weather. By the time the cocktail party started at 7 p.m., the performance was made impossible by the torrential downpours that soaked the city.

“I’m so sad about it,” said Chiuri taking cover in the store with the rest of the guests, including Piccioli, Valentino’s chief executive officer Stefano Sassi and Adrien Brody. “We were so happy about this job because it was really a way to show our atelier and fashion house is close with art and the idea that time is the new value, because now everybody goes so fast.” Indeed, Ruffo’s installation was a one-night only event and was set to be dismantled the following day.

Something with more staying power is in the works. Valentino revealed its plans in May 2016 for a permanent project done in conjunction with the city of Rome called Mirabilia Road. It will be a 12 kilometer walking trail, marked by a red line through the city’s famous landmarks as well as lesser known artistic and historic places. Grazia and Chiuri are working on it in collaboration with Filippo Cosmelli, Daniela Bianco and Simone Ferrari.

Over at Aby Rosen’s annual dinner at The Dutch at the W Hotel, the weather wasn’t dampening anyone’s spirits. “I love a little dancing in the rain, you know?” said Peter Brant Jr. Flash flooding or not, nobody was going to miss the most coveted party at Basel. “We do parties, cocktails, dinner nonstop, but this is the best party,” said Dee Hilfiger. With art heavyweights such as Larry Gagosian and Jeffrey Deitch, and Katie Holmes (tucked away in the back bar with Jean Pigozzi), Alex Rodriguez and Paris Hilton in attendance, iPad-wielding flacks were turning people away before they could even name drop a B-list celebrity. “This is like the OG crew, the whole family is here,” continued Brant, though he wasn’t referring to his father, the elder Peter Brant, who was also in attendance. “Oops, didn’t say hi yet,” Brant Jr. said.

Though Basel is generally considered good business for art dealers, not everyone at the party had contributed to this year’s economic success. “We shop, not always for art,” Hilfiger said. Her husband, Tommy Hilfiger, laughed. “We bought a house one year, we bought a hotel another. We’re distracted shoppers,” he said, referring to the The Raleigh hotel, which he purchased in 2014 and plans to renovate.

After dinner, the crowd made its way over to The Wall, where Alex Dellal, Stavros Niarchos and Vito Schnabel hosted the yearly Dom Pérignon party. Solange Knowles was DJing — and preaching. “Anybody who’s at Basel, we’re all very privileged to be here right now. Especially despite what’s going on in the world right now,” she said from the DJ booth. Standing on the banquettes, lording over the dance floor, the hosts didn’t seem to pay much mind.