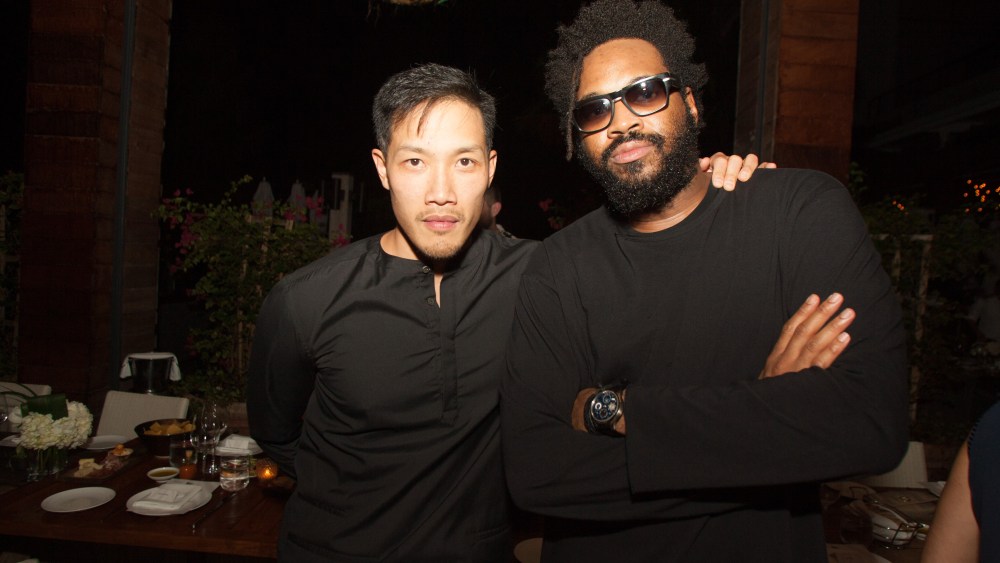 “This is the place to be in the afternoon, apparently,” said Carlos Mota from the second floor of The Webster, Laure Hériard-Dubreuil’s Miami Beach boutique. It was 5 p.m. on Wednesday, the day before Art Basel Miami Beach opened to the public, and Swarovski was hosting a cocktail party in the space for its latest coffee table book. “Some people tell me they come here to hide — it’s a break for everyone from the fairs and all the activities — but actually they see so many other people they’re not really hiding,” said Hériard-Dubreuil, adding, “I’m a bit stuck here, I feel like a child in the corner.”

Mota, for one, didn’t mind the frenzy surrounding the week. “People complain and b—h about it,” he said. “Sure, it’s more people, but everything is more people. There’s no such thing anymore as a VIP event.”

That could be one reason why the parties surrounding Basel seemed a bit more subdued this year — no Miley Cyrus or Kim Kardashian sightings, and most of the fashion brands opted for cocktail parties at their stores rather than blowout dinners. Save for DKNY, who hosted a dinner on the veranda of Matador Room, The Edition hotel’s restaurant, to celebrate a new initiative with The New Museum.

“Did you used to cut class and hang out in the staircase? That’s what that this feels like,” said Maxwell Osborne, one half of the design team behind DKNY (as well as Public School), stepping away from the crowd to discuss the project. (Later, the sounds of an Ellie Goulding concert, to mark her collaboration with MAC, made their way over the nearby pool.) The partnership — titled “The New Women’s Project” — will provide support for exhibits by five women artists — Nicole Eisenman, Goshka Macuga, Cally Spooner, Andra Ursuta and Beatriz Santiago Muñoz — in the spring.

“We’re products of mentoring and being brought up by a community and we thought it would be a cool thing to be on the other side of that and help emerging artists because that’s who we were,” said Dao-Yi Chow, Osborne’s design partner. “It really fits with DKNY, with Donna Karan starting the brand for empowering women,” added Osborne.

The New Museum also recently launched an initiative called Artemis Council to support commissions and exhibits by female artists, helmed by Maria Baibakova. It was the second women-oriented Basel event, with the Rubell Family Collection throwing a dinner to celebrate “No Man’s Land,” an exhibit featuring 100 female artists, the night before. And both came on the heels of a New York Times article about the disparity of women in film.

“I think the conversation has been a long time coming, and it’s just a question of what can we do,” Baibakova said. “I think if you look at the landscape today, there is still not enough parity between women artists and artists who are men. Gender shouldn’t be an issue, but it still is, and I think that we need to right the wrongs of the past by doing what we can today to support women. The New Museum has been a pioneer in terms of supporting women artists — over half the artists in their last triennial were women. I think that it’s time to celebrate that and to specifically raise funds for it.”

Inside Matador Room, the kitchen was pumping out the same menu of snapper and steak for Tina Brown and Ian Schrager’s dinner in honor of Whitney Museum director Adam Weinberg. “I think it’s important to remember, despite the wonderful mix of events, parties, socializing that goes on, the real point of Basel is about the greatness of art, the appreciation of art, the love of art, the enjoyment of art, the value of art,” Brown said. “Of course, Art Basel is a place where all these wonderful things of art and fashion and commerce collide,” she continued, prompting art dealer Bill Powers to wonder, “Do fashion and art really collide? It’s more like an arranged marriage….”

Jeremy Scott, who was throwing a party at newly opened hotel The Hall down the street, would disagree. “As someone who already plays so much with fashion and art this is a natural fit for me,” he said. “It’s just kind of like a symbiotic thing. I don’t need to position myself at all because I’m already cuckoo, as far as what people think.”

In the past, Scott has thrown parties at Basel to drum up press for a book, or in collaboration with The Warhol Museum. This year, though, it was just for the fun of it — inviting the likes of Paris Hilton and Peter Davis to “just a little fete to celebrate being me,” he said. “[Basel] is like a less intense fashion week for me, because I’m not doing my show but there’s a lot of the same people that I see. And I’m able to be more present, social and have a dinner and not be spent because I’m totally emotionally exhausted from working on my show.”

And just when the party was really getting under way, a massive downpour sent revelers scurrying into cabanas, where they kept dancing.