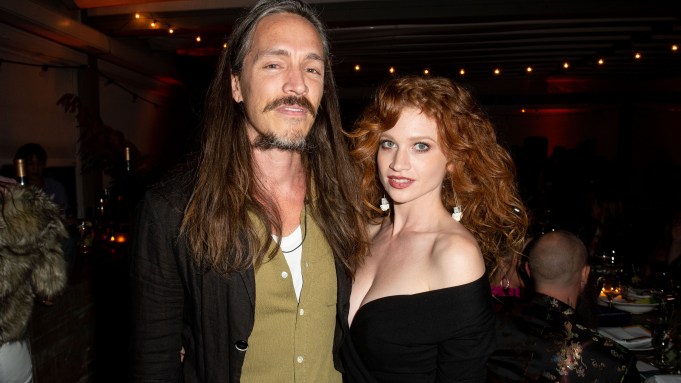 When the Surf Lodge asked Brandon Boyd if he was interested in coming to Miami during Art Basel to decorate their pop-up at The Confidante with his artwork, the Los Angeles-based painter-singer wasn’t immediately familiar with the Montauk hot spot.

“I mentioned it to friends and they were like, oh, they’re cool. Do it,” said Boyd.

And so he did. In addition to bringing some of his existing works to town, Boyd created a few new pieces for the exhibition.

“I go into painting and songwriting the same way, where I have almost no intention other than just jump into the deep end, and don’t tread water and just sink,” he said during a celebratory dinner in his honor Thursday night. “It’s a creative process probably not unlike someone else’s; mine feels formless, so the paintings are kind of formless. I go in and just let my hand move and the brush move — it’s spontaneous. All of the things I’ve been attracted to in my life, whether it’s music, painting, surfing, they’re spontaneous and there are no breaks. You adapt to your instincts.”

Boyd referenced the work of sociologist Joseph Campbell, who published a theory of the archetypal hero’s journey as reflected through mythology.

“He’s always been a kind of hero of mine. Not only because he inspired George Lucas with ‘Star Wars,'” he said, comparing Campbell’s idea of being able to distill stories through time to arrive at the same basic narrative arc to the idea that different creative iterations — singing, painting, dance, writing — can all similarly lead back to a similar focal point.

“I’m thinking about those things just like on a mundane day or event: there’s still something miraculous. We’re all expressing ourselves whether it’s we’re doing the laundry or making a painting or making a song or riding a bicycle,” said Boyd. “There’s something tying it all, that we all share — should we choose to look at it through the right lens.”

Pivoting between creative practices, Boyd doesn’t maintain separation between his expression through painting and music.

“Sometimes they happen simultaneously. I rarely listen to music while I’m painting; I love just opening up windows and letting in sound,” he said. “I’m humming while I’m painting, thinking about other things. It’s a really non linear, non specific process. I’ll stop for an hour and go pick flowers or play with my dog and go back to it,” he added. “I think the reason I always go back to it, the process in a larger sense, is because it feels wonderful to be existing in space where there are no rules, where it’s infinitely big but it’s also safe somehow.”

And you never know what you’ll discover when you open yourself up to the process.

“It’s fun and it’s fascinating — sometimes it’s a little bit scary, because it stirs things up. Sometimes the stuff that comes up is old stuff from when I was a kid but I’d forgotten about it,” he said. “It’s an opportunity to self reflect. It’ll be like oh wow, that didn’t really affect me when I was 10, maybe that’s what that song was about, maybe that’s what that painting reflected. Sometimes the paintings aren’t about right now, sometimes they don’t really show what they’re about until ten years from now. I want to just let whatever’s happening flow through, and interpret it later.”

And while Boyd, in town through Sunday, is on the hunt to pick up some new artwork, there is a limit to his spontaneity.

“The one thing I was attracted to yesterday was a George Condo piece. I just didn’t know — I knew he was famous, but I didn’t know how famous,” he said, recalling his conversation about purchasing the piece. “‘It’s amazing, how much is this?’ ‘This one’s 4.5 million,’ ‘Oh!’ Maybe one day. His work is beautiful.”