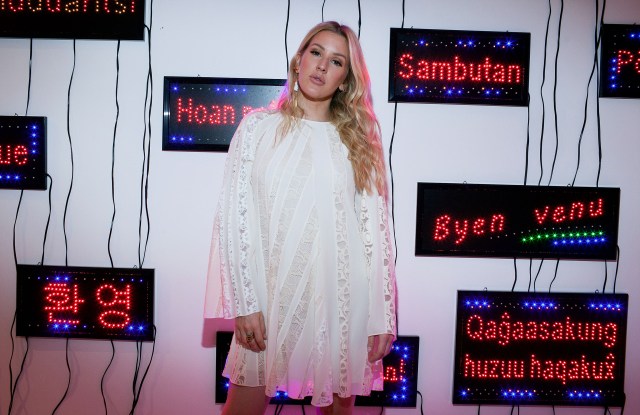 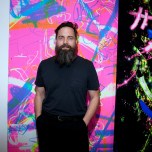 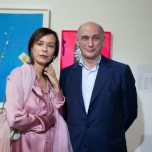 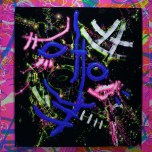 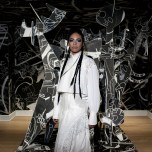 “One of the things that was really exciting for me was to have a few rooms to show the work in,” said Los Angeles-based artist Aaron Curry, weaving between the three rooms housing his solo show at the Bass Museum in Miami Beach. Chloé, a sponsor of “Tune Yer Head,” was hosting a dinner on Tuesday night at the museum for the Art Basel Miami Beach crowd.

“Each room has a similar language that’s happening. This is why I called it ‘Tune Yer Head,’ it’s almost like channel-changing through things, where it’s the same language, but as you turn the channel or go into the next room, things are switched. Patterns on the wall in one room are the patterns of the floor in another,” Curry added.

“I have a practice that’s a bit varied — I make paintings, collages, sculpture. Some outdoor work, some indoor work. So it was nice to have these different spaces to showcase different aspects of my work,” he continued. It also gave him the opportunity to realize a dream. “I’ve had drawings for chandeliers — they’re kind of loosely chandeliers — but I’ve been wanting to make these hanging lights that are almost like constellations for the past two years, and then finally I was like, ‘OK, I think I’m just going to make one now for Bass,'” he said.

Guests including Bernard Ruiz Picasso, Almine Rech and Ellie Goulding took in Curry’s work and also got an early look at the Haas brothers’ show opening the following day. At the beginning of dinner, musical artist Annie Sima performed a short set for the crowd.

“Truthfully, my friend organized this event and I’m showing my support. But honestly, I’m definitely a Chloé girl; I’ve supported Chloé for a long time, and they’ve supported me for a long time,” Goulding said before dinner, who attended the event with her fiancé Caspar Jopling, who is an art dealer at Sotheby’s. “Also, I love [the dinner] being in a museum — I think none of us get to museums, get to see art enough. It just so happens I’m immersed in it because of what Casper does, but otherwise I wouldn’t see half as much art as I would with him,” she added. “I think the collaboration is great, I’m a fan, and I love coming to Art Basel because seeing art influences my vision and how I write my music.”