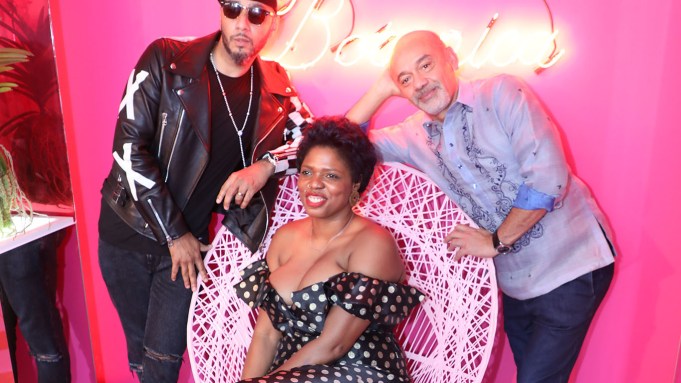 When Christian Louboutin signed on as a sponsor of artist Ebony G. Patterson’s exhibition at PAMM, which was celebrated Tuesday night with a buoyant party upstairs on the museum’s third floor, he didn’t realize that one of the show’s standout pieces would revolve around an especially appropriate item: shoes.

“It’s affectionately called ‘The Shoe Cloud,’” Patterson explained, noting that the actual title is “…stars…” The artwork includes hundreds of glitter-covered pairs of women’s shoes suspended from a ceiling-high beam, a reference to the makeshift memorials of sneakers that frequently dangle from urban light posts and wires. “It’s marking the sky like a star. It’s said that people actually do that with the impetus that the soul is closer to heaven and it will make its way there a lot easier.”

“It’s funny, because when I looked at that piece, something came to mind which has to do with my work,” Louboutin said. “When I started designing shoes, I never thought of fashion. My first thought was dancers, and the ultimate heel is the ballerina’s toe shoe. What is the point shoe? It makes you closer to the heaven, to the sky, in a way.”

The shoes Patterson used in the piece came from a variety of sources, including strangers she found through social media. “A significant chunk of those shoes also came from Goodwill,” Patterson added. “I made many, many trips to Goodwill. The first time, I rung up, like, $300 of shoes. The cashier said, ‘Nobody’s ever going to believe that I rung up $300 today.’”

So, the price of a single Louboutin shoe, provided that it was on sale? “Yeah,” the designer laughed.

Louboutin was introduced to Patterson’s work by Franklin Sirmans, PAMM’s director, and Kasseem “Swizz Beatz” Dean, who collects Patterson’s work and is a close friend of the designer. “He’s like my brother,” Swizz said at the event, which was also attended by Sasha Lane, Isolde Brielmaier, Victor and Athena Calderone, Derrick Adams and Bettina Prentice. “He’s a real person — he’s super humble. It’s not about the jets, it’s not about first class — he’s just living how he feels, and that’s true art.”

Sirmans feels there’s a strong connection between Louboutin’s and Patterson’s work, especially the artist’s effulgent wall pieces that inspired the display that’s currently in the window of Louboutin’s Design District boutique. “The whole idea when she’s dealing with the surface is very much about a form of decoration with objects,” he said. “That has a lot to do with what Christian does with shoes.”

Although the artist and designer have become friends, the shoes she wore Tuesday night admittedly came from a very different type of footwear retailer. “They’re from Asos,” she said.