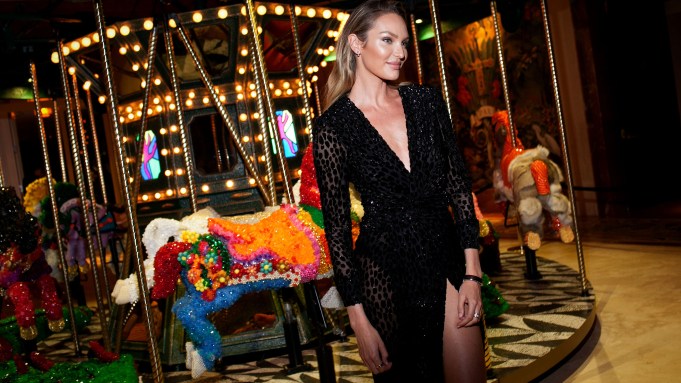 Go big or go home seemed to be the guiding mantra for Bulgari’s party in Miami Tuesday night.

Upon entrance to the Faena hotel, guests were greeted by Raúl de Nieves’ “When I Look Into Your Eyes I See the Sun,” a rotating carousel housing elaborately beaded whimsical creatures. The sculpture is the culmination of a collaboration between de Nieves by way of the Art Production Fund, and Bulgari.

But that wasn’t the only over-the-top display of the evening. Guests were ushered into the red-hued Faena theater, packed with long rows of tables accented by towering candelabras. One dinner-goer aptly described the spectacle as a David Lynchian Valentine’s Day.

“I got to jump up on there, take a little ride,” said Chloë Sevigny of the carousel in the lobby. “Raúl, I think he’s an amazing artist. I first discovered him when he was at the Whitney Biennial. And [Bulgari] said come on down, I was like, for sure. So I’m here for a couple of nights, go to the Nada fair, hopefully get some sunshine, all of that,” she added. “And I would always wear some Bulgari — even if I have to give it back at midnight, I’m down.”

De Nieves had coordinated his outfit for the surroundings, donning a custom red gown designed by his friend Luisa Beccaria and a pair of devil horns atop his head. And don’t forget the Bulgari jewels. “She’s surrounded by her own goods,” he declared of his sparkling serpent choker (which was also headed back to the vault at midnight.)

“At the end of the day, as a 35-year-old it goes back to I still want to hone into my own inner child,” de Nieves explained. “The carousel speaks for itself. There’s so much about this idea — the metamorphosis, the life, the experiences we choose to have, the things that we have and we want to require. There are so many entrances to it. There’s not an exit necessarily, it opens up itself. And I think that was the most beautiful thing, working with the idea of it and reminding not just myself but everybody this is something very cherishable, and memories are what hold us to be who we are.”

The artist was joined by his mother — who had tears in her eyes while he gave a speech during dinner — as well as Winnie Harlow, Laura Harrier, Candice Swanepoel, Dr. Barbara Sturm, and Yvonne Force Villareal.

Harrier, a Bulgari ambassador (“they’re my jewelry fam,” as she put it) recently finished filming a movie in the U.K. and is still doing press for “BlacKkKlansman,” but will be in Miami for a few days. “I’m a big fan of art,” she added. “I want to see the fair and a couple of my friends have booths there. My best friend actually has a gallery called Larrie that’s at Nada.”

Throughout dinner, dancers took the stage with increasing stakes — they progressively added fire to their performances — and the evening concluded with a performance by British singer Jess Glynne, who concluded her U.K. tour two nights ago.

“They asked me to perform a couple of months ago, and I jumped at the idea,” said the first-time Basel-goer. What was she looking forward to checking out while in town? “I’m here until tomorrow, and then I have to get back,” she said. “I’m going to go and see some stuff tomorrow.”