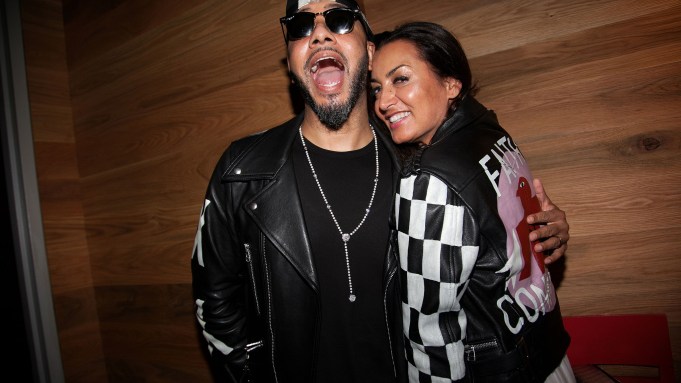 It was late at night in the basement of the Edition Hotel on Tuesday, and the crowd at Faith Connexion’s Whitewall issue launch party had several activities to choose from. They could rent bowling shoes to toss a ball down one of the three lanes or, if that didn’t strike their fancy, ice skates were being doled out nearby for the outdoor mini-rink. Or they could just simply drink.

Swizz Beatz, who arrived at the event with Kaws, took the chance to do some light reading — the magazine features a spread on the producer and, speaking of Kaws, Swizz happens to have one of the artist’s giant sculptures in his New York home.

“They shot this; it’s in my house, his piece. That’s his sculpture right there. This is my house,” said Swizz, flipping through the magazine’s glossy pages and pausing on a particularly arty shot of his collection. “I don’t even know how they got this. It’s a crazy shot,” he said, approving.

Swizz, decked in a Faith Connexion jacket, was on deck for DJ duties.

“I’m partners with Faith Connexion, so it’s a family thing,” said Swizz. “Two, it’s one of the coolest events during Basel, Miami week, Art week, No Commissions week. I’m just ready to tear the place up.” But to be clear, skating wasn’t on the menu. “No, I already broke my arm,” he explained. “I’m recovering.”

In addition to DJ and hosting duties, the producer has his own art fair, No Commissions, ahead of him.

“I give 100 percent back to the artists that are in the show, everyone gets in free, big performances every night. For me it’s a real give back, it’s really celebrating the artists,” he explained. “We create an entry point.”

Kaws was getting ready to make an entry onto the rink.

“You going to skate?” Swizz called out to his friend.