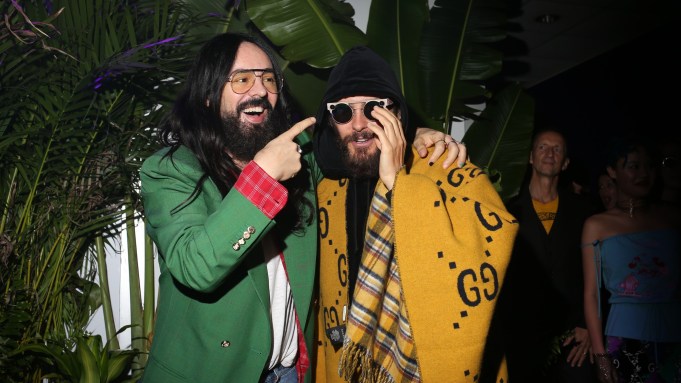 In case it’s not obvious, just about every major brand is in Miami this week, throwing parties, having shows or showcasing art collaborations. Joining in — and making his first trip to Miami — was Gucci’s Alessandro Michele, who arrived for a brief two-night stay to host a private event between Gucci and Snapchat for the debut of Harmony Korine’s new film “Duck Duck.”

Wherever Michele goes so does Jared Leto, who, dressed in a fringed branded poncho, described his connection to Gucci as “committed.” Sienna Miller was there as well, in addition to Gucci Mane, Chloë Sevigny and Jeremy O. Harris. As rumored, Iggy Pop took to the stage toward the end of the night, performing for the crowd.

What did the Michele make of Miami?

“It’s kind of beautiful. I mean I didn’t see a lot, but this morning was amazing — I woke up, in front of the beach,” the designer said. Prior to the party he had spent part of the day at the fair. “It’s huge,” he said. “I haven’t seen something like this ever. It’s the biggest art market ever.”

He even saw some art that caught his eye: “more than one! But I didn’t buy.”