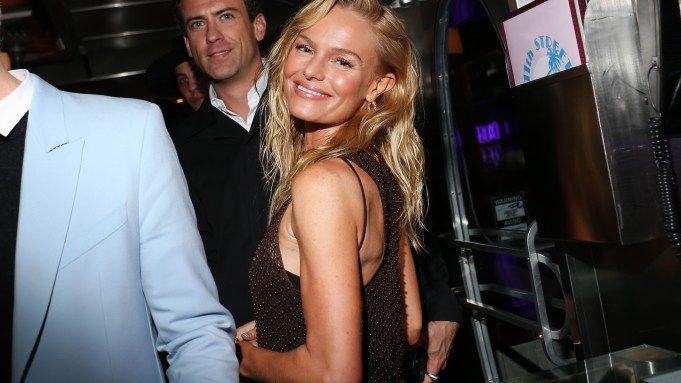 It was the last stop of the night for the roving fashion crowd — surely a french fry or two were deserved?

Such was the spirit inside 11th Street Diner in Miami Beach, which Bottega Veneta had wrapped in gold (literally) and taken over for a party on Wednesday night.

Fresh off his success at the British Fashion Awards, Bottega Veneta’s Daniel Lee had flown down to Miami for the event — and to get some warm weather in.

“I love Art Basel — it’s the most fun time in Miami,” Lee said upon arrival. “It’s winter in Europe so it’s nice to go to the sunshine. Also, I love art so it’s a good time to come.”

The designer had been to the Design Miami fair earlier in the day and walked away with a purchase.

“I bought a plate. A ceramic plate. It has bananas on it,” he said, pulling out two iPhones to find a photo to share. “I love it. It’s so nice — it’s amazing, so good.”

Lee, who is staying in Miami until Friday before heading to Milan, was joined by Kate Bosworth, “Euphoria” actor Angus Cloud, Richie Shazam, Paloma Elsesser, Shantell Martin, Ama Lou and more for the night.