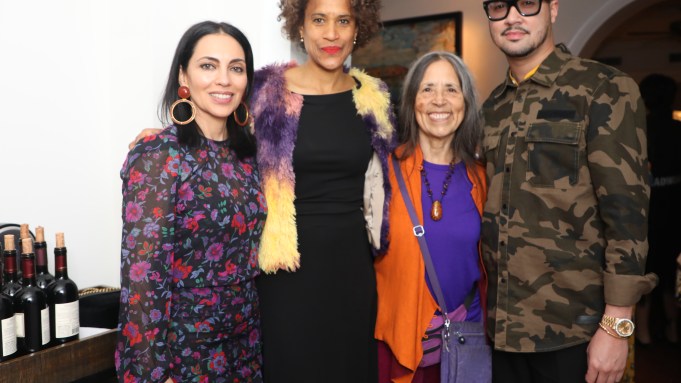 “I think it’s an incredible moment to be able to do a show of this scale, that has over 20 years’ worth of work, back in my hometown,” said Fernández, who has lived in New York for two decades but grew up in Miami. “I also think it’s really important that this show is up at the same time as the Cecilia Vicuña survey show at MOCA [Museum of Contemporary Art] North Miami. For me it’s an important moment to show the work that I’ve been doing for such a long time, and to give visibility and hopefully to inspire lots of Latina girls in the city who have never seen a show headlined by somebody who looks like them or who has a name like them.”

Like many in attendance, Marlies Verhoeven had stopped by PAMM to see the exhibition earlier in the day.

“It was incredible — and it was amazing to see all of the works together, because it spans a couple of decades from her career so you see early work and then the work she’s working on now all in context,” she said. The Cultivist founder is looking forward to checking out the Meridians section at Art Basel, which is dedicated to large-format work. “They’re doing it for the first year here in Miami because the convention centers now finally finished, so everyone’s excited to see that.”

PAMM director Franklin Sirmans, who met Fernández more than 20 years ago, said the conversation started over three years ago to bring Fernández’s work to the museum. After it closes in February, the exhibition will next travel to the Phoenix Art Museum.

“We consider ourselves to be of course a museum of modern international contemporary art, but we are also a museum that seeks to be defined by its location. And by that I mean that we should be the best of representing work of Latin America and the Caribbean,” said Sirmans. “For me it was always a given that this would happen here.”

Sirmans was headed to Art Basel in the morning and like Verhoeven, he was excited to check out the Meridians sector at the main fair.

“To know there’s that kind of commitment to the large-scale installation format here in Miami is amazing,” he added.