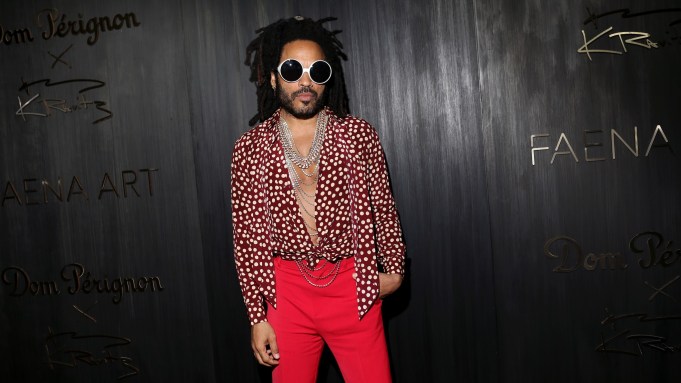 So much has changed in the many years since Art Basel launched in Miami Beach in 2002 — but Lenny Kravitz remains an Art Basel staple.

“I was at the first one,” Kravitz said Wednesday evening, having just arrived at the home of hotelier Alan Faena. “Everything has just gotten bigger — more events. It’s turned into a lot more than the art. But Miami has just grown and grown and grown. It’s pretty amazing.”

The musical icon, dressed in diamonds, white shades and reds, had arrived back in Miami for a party marking the end of his two-year collaboration with Dom Perrignon. Miami is very much part of him: he’s been coming since he was a baby, and later lived in the Sunshine State city for many years.

“My mother is Bahamian, and a lot of the Bahamian family came to Florida. One of my aunts moved here, so I’ve been coming here since early on,” he said.

The party, which drew Paris Hilton, Sean Penn, Peter Dundas, Tommy Hilfiger, Luka Sabbat and more, was the conclusion of a series of parties Kravitz has thrown in celebration of his work with the Champagne brand.

“We’ve been doing these all around the world: in South America, in Europe, all over. This is the last one,” he said. Why Miami for the finale? “It’s the end of the year, it’s Art Basel, it’s warm and it’s a hop over to the Bahamas where I go home at the end of the week.”

Hilfiger is also loyal to Basel — he and his wife, Dee Ocleppo Hilfiger, are hosting a party at their home for the artist Ashley Longshore.

“All the art is hung in our home,” Hilfiger said.

“That’s what we were doing all day today,” Dee chimed in. “We were like ‘no to the left, to the right, I want that one over there.’”

“She was art directing,” Hilfiger said, giving his wife the credit.

“No, no, we both were!” she offered back. “It’s a collaborative effort, honey.”

The pair said they’ve attended just about every Art Basel in Miami in the past decade, and have noticed the growth of fashion connections to the art and design fair.

“I was just with Kim Jones two hours ago, and he said that he doesn’t draw this kind of crowd in Paris,” Hilfiger said, referring to the Dior men’s show on Tuesday. “There’s a vibe here that you don’t have in London, Milan, Paris, New York. There’s something else here.”