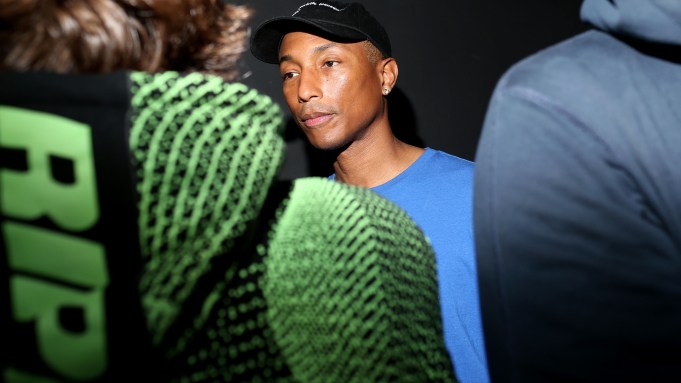 The crowd swarming on the sidewalk outside the Billionaire Boys Club ‘Icecream Miami Pop-up’ store Thursday night gave indication that Pharrell Williams, BBC’s cofounder, must be in sight.

Inside the store, Williams was indeed on hand, giving his signature prayer hands pose for photographers and posing with the artist Hebru Brantley, in celebration of the Hebru Brantley x Billionaire Boys Club x Adidas Originals collection, put on by Bombay Sapphire.

The limited-edition shoe collection was on display for sneakerheads, as was a centerpiece sculpture created by Brantley, which he described as a “cross between one of my characters and the BBC helmet.”

“With everything I do, it’s just an extension of what I do in the studio,” he said, tucked in a corner during a brief moment away from fans. “Making things that are a little bit more palatable for a wider audience — that’s primarily the attempt.”

He said the collaborative process between him and Williams is “super easy,” given they’ve worked together now a few times.

“Typically when I collab, for me the collab is less being told, but me bringing my strengths and whoever I’m collab-ing with them bringing their strengths and just going back and forth throwing ideas,” Brantley said. “This whole thing, this is probably the fastest, most efficient collab I’ve ever done — [Pharrell] and I have a second hand.”