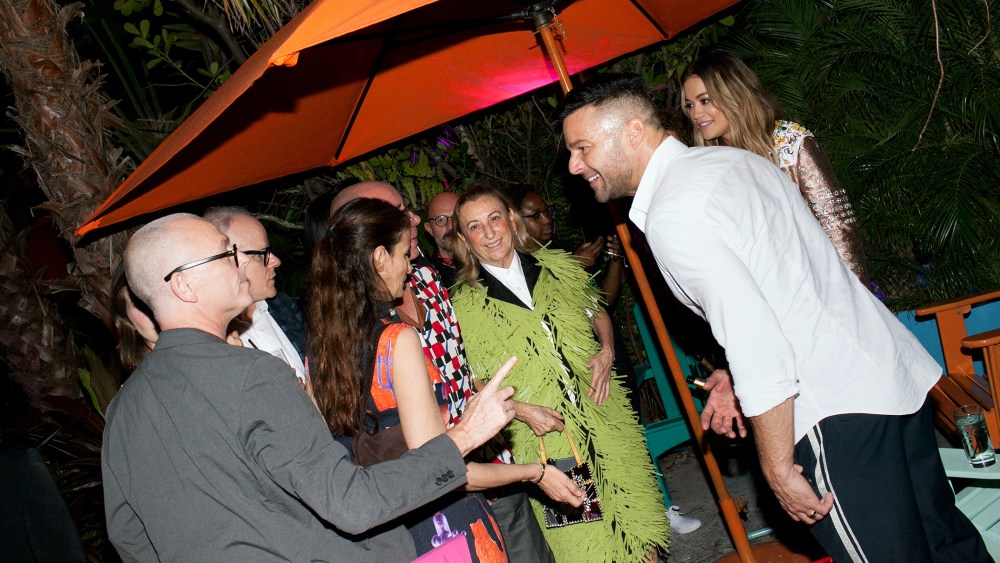 Tuesday night had just eked into Wednesday morning when Prada walked into the packed opening night of Prada Double Club, a pop-up club designed in collaboration with German artist Carsten Höller. The pair hurried past an organ and metal drum band, past the cocktail bar and over a footbridge to huddle with Ricky Martin and Rita Ora underneath a VIP beach umbrella, as Champagne bottles were passed to them.

The party was only getting started.

Haitian musician Wyclef Jean took the neon-lit outdoor stage near 12:30 a.m. for an extended set, providing a musical backdrop for Höller to show off his enthusiastic dance moves. The artist broke into an enthused boogie, his hands in the air as “Super Freak” came on and, at one point, lifted his shirt for dollar bills to be tucked into his waistband.

Prada sat down elegantly on the corner of the stage nearby, watching as the dancing unfolded around her.

“This is what a block party sounds like,” Jean declared to the crowd, playing the intro beat to “I Want You Back” followed by Aretha Franklin’s “Respect” for “the ladies.” Earlier, he had invited all of the Swedish women in the crowd to join him onstage.

The pop-up club, which originally launched in London in 2008, is housed in a former ice factory and includes a bar, a restaurant and a disco. It will continue through Thursday evening, concluding with a performance by Nineties-era rappers Redman and Method Man.

Art Basel Miami Beach: From the Wynwood to the Walls