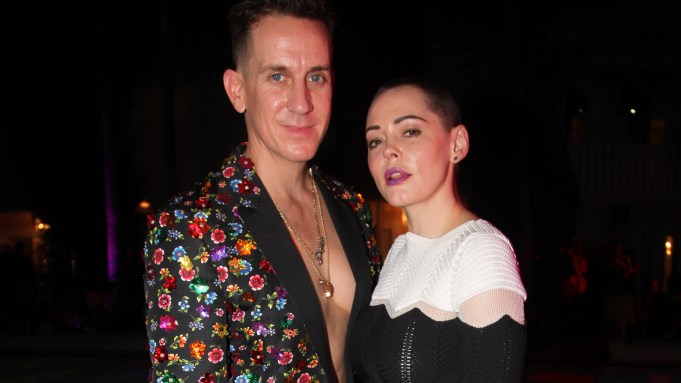 Well, it was only a matter of time before someone fell into the pool at one of the countless booze-fueled pool parties taking place around Art Basel Miami Beach. Rapper Young Paris — and the female fan who tackled him — took the honors at Moschino’s after party at The Delano Hotel on Dec. 1.

“It’s good for press, it’s fine. I’ll have her removed in a minute,” remarked a flack as the huddle of photographers in the VIP area scurried to capture the moment.

There were many other moments to capture at the SBE-sponsored party, as well: the overflowing ball pit inside of a bathtub on the lawn, evoking bubble bath imagery as attendees climbed inside for the Instagram opp, the giant inflated tropical flower stationed on the ground, the long pool filled with ping-pong balls, onto which psychedelic imagery was being projected. The Moschino and Jeremy Scott devotees clad in colorful and kitschy ware, bare skin glossed from the light rain.

Scott himself had stepped out in a colorfully embellished suit — sans shirt. This is Miami Beach, after all. “Are you hot?” a friend of Scott’s asked him. “I am a little bit, I’m not going to lie. I’m not used to humidity,” Scott replied.

The designer has been hitting up the fairs, SoulCycle-ing and catching up with friends during his time at Art Basel Miami Beach. “I like that it feels like fashion week without the pressure,” he said. “I see a lot of friends that I don’t get to see, it’s calmer, it’s not like ‘Oh my God, I have a show.’ I don’t feel, like, battle-wounded from that and then trying to go into the after party.”

Although with all of the Moschino faithful wandering in and out of the cabanas set up around the pool’s perimeter, who could tell the difference between a party or fashion show?