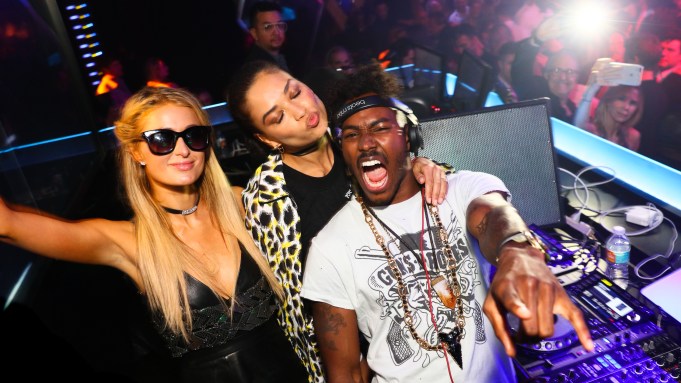 Aby Rosen’s dinner at the W Hotel and subsequent after party at The Wall, hosted by Dom Perignon, is a hot Art Basel Miami Beach ticket. Behind the rope outside of the venue, punches were thrown, prompting the entrance to get shut down briefly.

The VIPs were all safely inside already post-dinner at The Dutch — Jeffrey Deitch, Paris Hilton, Karolina Kurkova, Gucci Mane, who performed a short set, which included one of the songs he’d written during his recent prison stint and “Black Beatles,” the Rae Sremmurd song on which he has a “Feat.” Rosen was taking all of the post-dinner champagne-fueled revelries from his post standing atop a banquet next to a wall in the back.

Paris Hilton and Brandi Howe had come dressed in similar outfits designed by Howe. “This is my favorite dinner of the whole year,” Hilton declared. While the VIP party scene will start cooling down, the pair will be in town through Monday — Hilton is DJing a party, and the pair have been working on “a really amazing art project to be out soon. It’s a surprise,” she explained. “All my friends flew in from around the world to celebrate.”

In the meantime, she’s been browsing the fairs for inspiration.

“This has been one of the best years so far. I saw some of the work today, and I was so impressed with it.”

Who said that Art Basel Miami Beach was over?