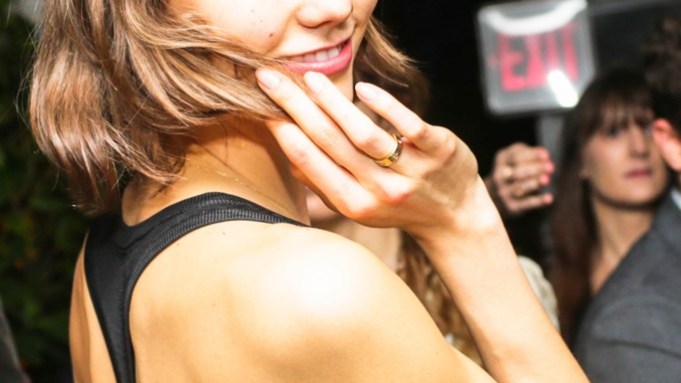 They say all’s fair in love and Art Basel.

One of the most coveted invites of the party-studded week was to Chanel’s intimate dinner (intimate meaning 150 guests in the Miami Beach fair’s 11th year). The chance to rub elbows with guests like Demi Moore, Lenny Kravitz, Larry Gagosian and Wendi Murdoch had Soho Beach House members camped out for a lengthy cocktail session beginning late afternoon.

“I don’t collect art and won’t walk the fair since it’s too overwhelming,” she said, only touching down in Miami on the way to another destination. “Unfortunately it isn’t a tropical one.”

Partying later that night at a table inside the much too tiny tent for Chanel and Art.sy’s beachside barbecue were revelers ranging from Kravitz and Kloss to Martha Stewart, who was making the Basel circuit Wednesday, and a mohawked curator from MoMA PS1. The main talk was whether Moore’s reported new love interest, Vito Schnabel, would show, and more importantly show and tell their dating situation. Perhaps the story will play out at his Dom Perignon bash at Wall nightclub on Thursday.

As more people — a subduedly dressed Pharrell Williams save for a flash of gold leather on his wing tips, Russell Simmons holding hands with new squeeze Hana Nitsche, Damien Hirst and Brian Atwood — piled in, the party spilled out onto the sand and crashing surf to the point where swimming was the only option.

“It’s art by day, party by night,” said Armani and Galliano-clad brothers Peter and Harry Brant, who swayed sylphlike atop the hot banquette. “It seems fashion has really taken over the art, but we plan to be on the hunt for works by our favorite artists like Urs Fischer and Elizabeth Peyton.”

Mountains of paella and steak sandwiches took the “starving” part out of artist, which brought out a bunch, such as Daniel Arsham, whose Snarkitecture’s installation graced Design Miami’s entrance; Kaws; Jim Drain, and Naomi Fisher.

“It’s so great to see our friends from all over the world and have a massive dance party,” said Fisher, a Miami local who smartly wore New Balance sneakers because if anything has been learned in nearly a dozen years, it’s Basel isn’t for the claustrophobic or high-heeled.