Art of All Kinds at MoMA’s Garden Party

The threat of rain on Tuesday night didn't seem to have much effect on the artsy crowd that turned out for the Party in the Garden. 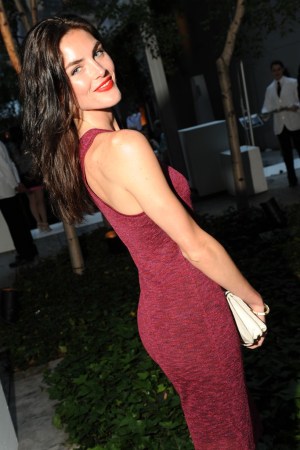 The threat of rain on Tuesday night didn’t seem to have much effect on the artsy crowd that turned out for the Party in the Garden, the Museum of Modern Art’s annual open-air spring fundraiser. The large clear plastic tents the museum had erected over its Abby Aldrich Rockefeller Sculpture Garden probably had something to with that. Among the artists and arts patrons at the Cartier-sponsored bash were Chuck Close, Agnes Gund, Rachel Roy, Hilary Rhoda and Cindy Sherman, who is currently enjoying a major retrospective at the museum and, who during cocktails demonstrated the auditory possibilities of her plastic daisy-embellished Marni skirt for MoMA director Klaus Biesenbach.

Solange Knowles made the cocktail rounds in a Flaminia Saccuci skirt with an Angelina Jolie-at-the-Oscars slit.

Later as the singer left dinner on the museum’s second floor terrace for her DJ set at the after party, which also featured a performance by Santigold, one older collector took note of Knowles’ revealing look.