Creations from the accomplished costume designer's résumé, which includes “Alice in Wonderland” and “Snow White and the Huntsman,” surrounded the event. 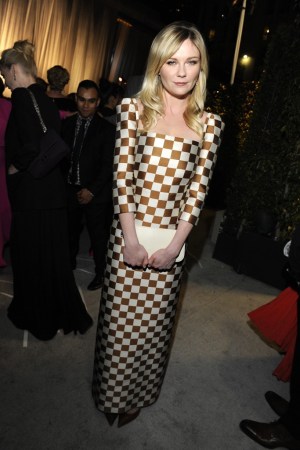 Costume designer Colleen Atwood, who received The Art of Elysium’s Visionary Award at the organization’s sixth annual Heaven Gala on Saturday night, showed off those skills by transforming the 2nd Street Tunnel in downtown Los Angeles.

Used as an urban backdrop in countless films and commercials, the space got an otherworldly hereafter makeover with a spotlight peering out of an enormous eye that scanned the space above 400 attendees. Costumes from Atwood’s accomplished résumé, which includes “Sweeney Todd,” “Alice in Wonderland” and “Snow White and the Huntsman” (for which she received her 10th Oscar nomination last week), surrounded the event venue along with large heating fans offering welcome relief from the chilly temperatures outside.

Recommended by last year’s Visionary Award honoree Cameron Silver for this year’s award, Atwood leapt at the chance to brighten the lives of children battling serious medical conditions for whom The Art of Elysium puts on workshops.

Among the actors and actresses at the gala, including Elijah Wood, Camilla Belle, Kirsten Dunst, Amber Heard, Busy Philipps, Anna Kendrick and Abigail Spencer, talk turned to their own past wardrobe work. One that stood out for Spencer she wears in the upcoming “Oz: The Great and Powerful” to play May, an assistant to James Franco’s Oz in Kansas.

“It’s corseted; It’s multilayered,” she said. “You couldn’t eat too much in that costume.”