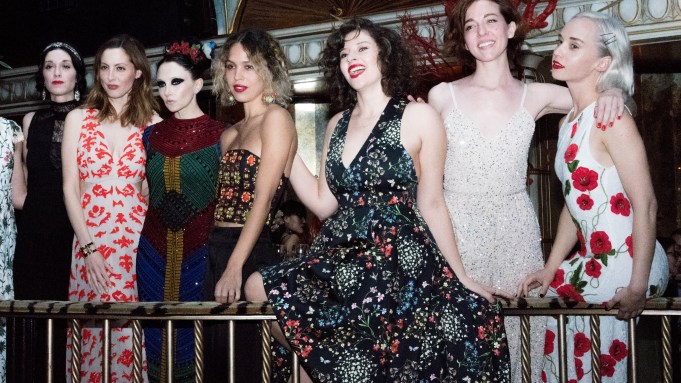 “I’m having trouble breathing,” Ryan McGinley said as he accepted his honor from the Art Production Fund at the organization’s seventh annual gala on Wednesday night, this year held at the Paramount Hotel’s basement club, Diamond Horseshoe. McGinley then clarified what he meant. “But not because I’m nervous. Because I’m uptown.”

McGinley went on to thank his mother — who sat in the audience and who McGinley admitted is sometimes shocked by the graphic nature of his work — as well as New York City, where he’s lived longer than his hometown of Ramsey, N.J. “As a gay guy, it’s a city where I can hold my boyfriend’s hand and nobody gives me s–t, so that’s why I love it,” he said of Manhattan. “Whenever people ask me where I live, I always say I live downtown because that’s where my heart is and that’s where my people are.”

Sponsored by Gucci and themed “Concrete Jungle,” the event also honored Jane Kaplowitz Rosenblum, whose son Theo created the sculptural centerpieces on each table to be raffled off for $100 each. For the guests not wearing Alessandro Michele’s latest frothy designs for Gucci, Art Production Fund cofounders Yvonne Force Villareal and Doreen Remen, and executive director Casey Fremont called for a rather nebulous dress code: “Tooth & Nail.” Fremont did her best to explain: “We sort of intentionally give dress codes that are open to interpretation,” she said. “We like a theme but we don’t want it to be costume-y. And ‘Concrete Jungle’ [lends itself] to animal prints and jungle influences, but people can do what they want with it.” Amy Sacco decided on a simple black dress and diamond skull face earrings. “I’m just a concrete blonde,” she said.

Aside from the people-watching, the evening offered its fair share of entertainment, from temporary tattoos created by Joyce Pensato to portrait sessions with Steven Klein in a darkly lit room filled with masks and props. (The catch: Each photograph cost $1,000, with proceeds going to the fund.)

Near the club’s entrance, guests were greeted with a performance art piece called “Not Your Art Baby” by Petra Collins and Madelyne Beckles, who sat behind a glass wall sucking pacifiers and clutching teddy bears. “We wanted to make a critique on how the art world sees us as young female artists,” Collins explained. “So we turned ourselves into exactly what we feel like the art world perceives us as: art babies.” Last month, the 23-year-old artist was cast as a model for Gucci’s fall runway show in Milan. “I love to perform, so I wasn’t nervous [to walk the runway], but I have really bad knees — my kneecaps always dislocate. So I was scared that my knees would f–k up,” she said, lifting up her Gucci gown to reveal her bandaged kneecap.

A live auction led by Gabriela Palmieri garnered about $100,000 for the fund, with a custom furniture piece by Kenny Scharf selling for $11,000 and a Peter Halley painting going for $40,000, before Jillian Hervey, better known as Lion Babe, serenaded the room with a sultry performance. On his way out, McGinley, known for his epic cross-country road trips, admitted he was a little tired: “I’ve been doing this project at nighttime, shooting at 10 p.m. until 6 a.m. four nights a week. I slept till noon today,” he said. “Expect an exhibition of New York photographs soon.” In their goodie bags, each guest received a beach towel decorated with one of the artist’s cheeky prints.