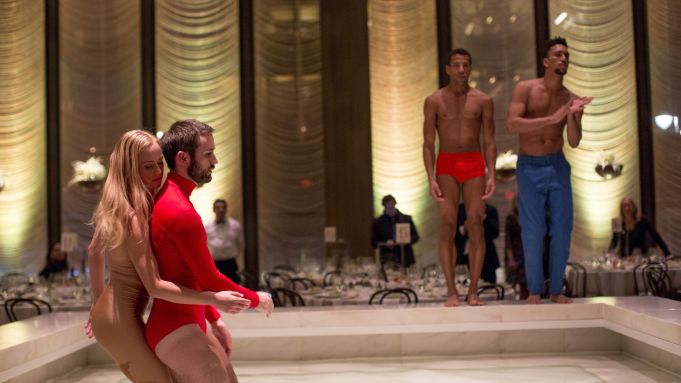 “I have amazing news,” Alysia Reiner told the crowd inside the soon-to-open Landmark Rooms inside the Seagram building — a space more intimately known for its tenure as the Four Seasons. “There was a dance performance created just for this space, just for this night, just for all of you, going on in that room,” she continued, gesturing toward the former pool room. “I think you want to be there.”

Down the hallway, four skimpily clad dancers were splashing around in the pool as Aby Rosen watched on, his iconic architectural design detail turned into a prop, but for a cause. The performance ended with a declarative missive: “A state of emergency is also always a state of emergence.”

The Ryan Kelly and Brennan Gerard performance piece was commissioned by the Art Production Fund for its “Bright Lights Big City” benefit on March 13, which honored designer Miuccia Prada — who wasn’t able to accept the honor in-person — and artist duo Michael Elmgreen and Ingar Dragset, paying homage to their 2005 “Prada Marfa” sculpture, a false Prada storefront outside of Marfa, Tex., which the Art Production Fund produced.

“[Prada] donated shoes and bags, and allowed us to use the logo, and really made it possible,” said Art Production Fund executive director Casey Fremont, decked in a feather-trimmed look from Prada’s spring collection, as were cofounders Doreen Remen and Yvonne Force Villareal. “We were actually just in Marfa for Yvonne’s birthday two weeks ago, and I brought my kids — I hadn’t been there since it originally debuted over 10 years ago” Fremont continued. “My life was in a very different place, it was really nice to go back and see it.”

Guests who were feeling flush and lucky had the chance to walk away with their own Elmgreen and Dragset tchotchke — the design pair had created limited-edition door sculptures, titled “Untitled (Exit),” which were being used as centerpieces and raffled off table by table for $250 a ticket.

Astrid Welter, head of programs at Fondazione Prada, accepted Miuccia’s honor in lieu of the designer herself. “Our best wishes go to [Elmgreen and Dragset] as they cope with the creation of the Istanbul Biennial, which is really a tough task which they have ahead,” Welter said. (The artist pair are cocurating the exhibit later this year.) “But a good neighbor is a very promising motive for doing so.”

Perhaps Kelly and Gerard took her words to heart — they ended the night with a trip into the pool. Same crowd, same room, same design, different name — we’re back in business, folks.