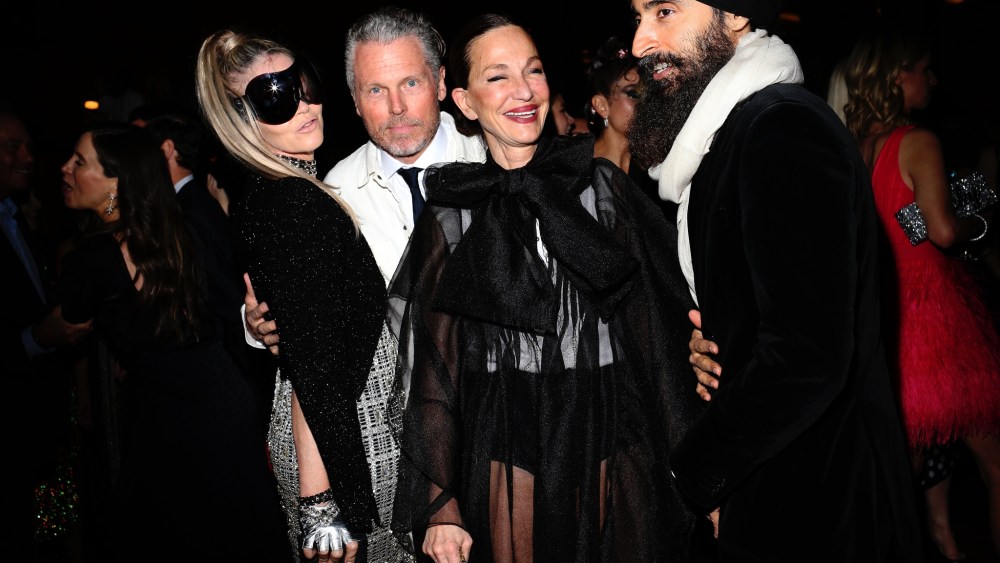 The stock market’s worst day in more than a decade. Growing panic (and confusion) over an epidemic. Yes, Monday in New York got off to a heady start, but it wasn’t enough to rattle the philanthropic art world’s evening plans. In fact, the Art Production Fund’s annual spring gala at The Pool, which honored Tom Sachs and Sarah Hoover, seemed even more packed than usual, underscoring the idea of art as an antidote.

The dress code was “Black Hole, White Manicure,” but could also be interpreted as “Chanel,” which co-chaired the event. Accessories ran the gamut, with the public art organization’s cofounder Yvonne Force Villareal donning ski goggles and Chanel gloves (in times like these, better safe than sorry) while Stacey Bendet and Huma Abedin passed around hand sanitizer during cocktails. “Hand sanitizer! The accessory of the season,” exclaimed Bendet.

The accessory of the evening, however, was actually a lanyard signifying participation in the Tom Sachs NASA Space Program. On the room’s upper landing, Sachs had installed his Space Program Indoctrination and Re-Education Center, a performance piece of sorts, and for a $500 donation guests could go through the application process typically reserved for his studio. “Tom has done four space missions,” offered an assistant.

Helen Lee Schifter was in the middle of the program’s first step: filling out a form and providing a swabbed sample. Step two was receiving a Chanel-polish manicure with Tom Sachs nail art decals (the selection was titled “Sick Nails,” a reference to the artists’ 1996 sculpture “Sick Nails and Ground Communications” which felt a little too on-the-nose). Participants finished up with a quiz and some “loose parts” sorting.

“We handed it over to Tom,” said APF executive director Casey Fremont of the evening’s direction. “We said he could do whatever he wanted. He started off by bringing the Chanel nails to the showroom, and then it grew into the whole indoctrination experience. And it was so generous, because he’s [letting] our guests experience this really sacred studio ritual.”

Nearby, a tray of Jello shots and Kool-Aid were the only drinks left on offer before dinner. The shots were the work of Sachs’ wife Hoover, who created and annotated the menu for the evening. (The reasoning for the shots? “I didn’t go to a college with sororities and I’ve been making up for it ever since,” she had written in the menu’s margins.) Ruinart champagne — which sponsored the event — was also on offer throughout the night.

“He went that way in a white jumpsuit,” offered Cynthia Rowley to someone trying to track down her husband Bill Powers; the gallerist had managed to file his way past the nail station to greet the artist himself, as guests began filing into The Pool for dinner. Sebastian Bear-McClard perched on the edge of the room’s iconic central pool, filled with Tom Sachs illustrated silver balls, as he chatted with wife Emily Ratajkowski and Hoover.

While guests settled into their first course (caviar and Carbone caesar salad, “a crunchy Friday night treat”) Ratajkowski stepped behind the mic on the room’s upper level to introduce Hoover and recount the origin of their friendship, which involved a healthy amount of social media stalking before running into her poolside at a hotel.

“I feel like this is my funeral and that was my eulogy, and you guys, Tom Sachs did not cry,” said Hoover, who admitted to imposter syndrome as she offered up two reasons for why she was being honored: she could get Sachs to the event on time, but also her enduring support of Art Production Fund’s initiatives.

“I firmly believe that all of us here are at the top of the art world food chain, and it is imperative to provide art for people who didn’t study it in college and maybe don’t go to museums and don’t have the opportunity to see it as often as we are so lucky to,” Hoover said. “It’s easy to find glamour in New York City, but it’s a little harder to find committed philanthropic people who are willing to give generously to causes that matter, that change the way people react to New York City and to each other, and that impact lives and further our shared belief that art is powerful and can help us reimagine the world to be better.”

After that, Sachs kept his remarks brief — perhaps in anticipation of the imminent cheeseburger main course.

“James Brown said, ‘I thank the Lord every day that he allows me to work,’ and it really is my privilege to do all this work,” said the artist. “Art’s a tricky thing, it’s really confusing; I’m not going to get into how hard it is to define. But it’s hard to make it accessible and rigorous, and that’s what I strive to do and that’s what APF does.”