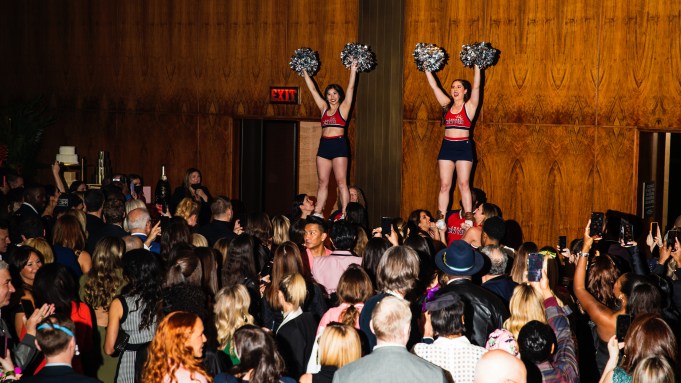 “We’re at a reunion. It’s all school-college themed, so we didn’t hold back,” said Art Production Fund executive director Casey Fremont, standing near the giant frozen sculpture situated on the mezzanine level of The Grill. The functional piece (guests could pour a cocktail through an internal tube into a martini glass) was chiseled with “Art Production Fund x Saks,” the gala’s sponsor. The public arts organization was back at the iconic restaurant space within the Seagram building for the first time since March 2020, when its spring gala was the final in-person New York society event before the city’s pandemic shutdown.

“We wanted to celebrate being back together,” added Fremont of the evening’s central theme.

The Art Production Fund gala is known for always having a creative dress code, and Tuesday night was no exception; the missive was “Tight Knit,” which guests interpreted in all manners. (Given the amount of mesh looks in the room, it was often a loose interpretation.) Art Production Fund founder Yvonne Force Villareal donned a varsity letter jacket — her letters, of course, were “APF.”

“One of my favorite interpretations of it is ‘tightly knit community,’ and friends and family, and a sense of reunion now that we’re all back here socializing together,” said gala honoree Sanford Biggers. The artist, who first connected with the organization in the early 2000s shortly after he moved to New York, collaborated with Art Production Fund on a public installation in Rockefeller Center last summer. The artist recently opened the final leg of his solo exhibition “Codeswitch” at the Speed Museum in Kentucky, and has two commissions forthcoming with MIT and the National Black Theater.

After a prolonged cocktail hour, a group of cheerleaders burst into the room, pom-poms shaking. “G-O take your seats!” they exclaimed, before flanking the hallway leading into The Pool for dinner. Moon Medicin, Biggers’ performance art band, awaited on the other side. The performance was sponsored by Gucci, and multiple guests, including Fremont and artist Dustin Yellin, were decked out in Gucci monogram — an alternate, unofficial dress code.

The school theme continued throughout the evening. Guests found their seats via embroidered Art Production Fund track jackets, and the evening’s program came in the form of a speckled composition book slash yearbook, which named Biggers as the “Life of the Party.” Tucked inside was a menu which had been annotated by Sarah Hoover with nostalgic quips. Underneath the appetizer course, she’d written: “You all better be in a Ruinart Supernova by now.”

Before dinner, the crowd rose to their feet for an announced performance of “Lift Every Voice and Sing.” Otherwise known as the “Black National Anthem,” the song has recently gained support for replacing “The Star Spangled Banner” as the U.S. National Anthem — a bill filed by congressman James Clyburn is referred to the Subcommittee on the Constitution, Civil Rights and Civil Liberties in the house.

Introducing the man of the evening, chef Marcus Samuelsson recalled meeting Biggers for the first time in New York, shortly after both young men arrived in the city after spending time in Japan. Samuelsson, of course, went on to open the game-changing Harlem restaurant Red Rooster.

“There are a couple things that have always been in [my] restaurants,” the chef told the crowd. “My grandmother’s handwriting, who taught me how to cook, and the good juju you always want: Sanford Biggers.”

The Gem Awards Mark 20 Years, Focusing on a Sense of Community