Art Stars at the Whitney Gala 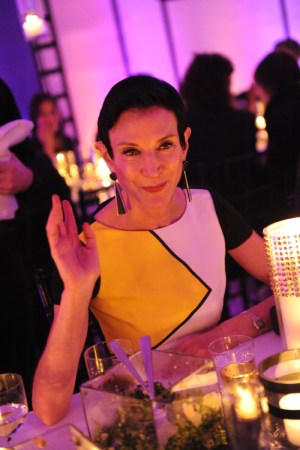 The Whitney Museum’s annual gala and studio party on Tuesday night, this year sponsored by Microsoft and Pamella Roland, was originally supposed to take place at Hudson River Park’s Pier 57 a month prior, until Hurricane Sandy foiled the plan. Rescheduled at the museum’s Madison Avenue headquarters, the gala’s postponement resulted in quite a few double-bookings on the social calendar.

Designer Pamella Devos, for one, had just come from hosting a fundraising luncheon and fashion show at Mount Sinai.

“We had a [museum] board meeting right before this. Everyone was saying to me, ‘Where were you?’ And I had to tell them, ‘Oh, just a little fashion show uptown. It’s a busy, busy time,” she said.

The gala, which raised over $2.7 million, honored philanthropist Sondra Gilman Gonzalez-Falla, known as much for her dedication to the arts as she is for being one of the world’s top photography collectors.

“This is a spectacular evening for me. I keep telling everybody I’m wearing Andy Warhol’s flowers,” said the honoree, who was all smiles next to her husband, Celso Gonzalez-Falla.

Lowman, who fingered through stacks of vinyls between songs and finally settled on a track from Gang Gang Dance, said he was taking a break from art: “I have an art show that’s up in Connecticut right now at The Brant Foundation, and it took all of my energy.”

Timo Weiland, enjoying a night off before a jam-packed day of pre-fall appointments, had just returned from Art Basel Miami and a surfing trip in Mexico. “Ninety degree water over there. Can’t complain about a damn thing,” he said.

Devos made her way down the staircase arm-in-arm with her self-described “best friend,” Nigel Barker.

“You know, tonight is all about photography, and some of the Avedons I bought even a couple years ago, they’ve gone up so much in value,” she said. “Photography right now is a very good investment.”