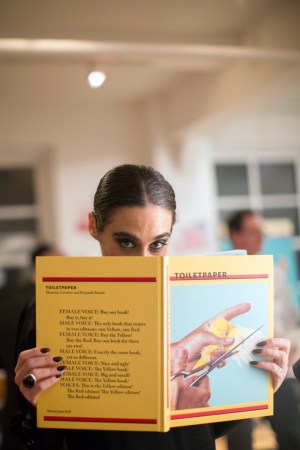 As an elevator full of partygoers opened directly into the home of Laurent Claquin’s loft in Manhattan’s Gramercy neighborhood on Monday night — where the head of PPR Americas was hosting a party for the artist Maurizio Cattelan’s book, “Toilet Paper” — the first sight to behold was a giant dessert installation spread across a Ping-Pong-cum-kitchen-table.

Two pink “cakes,” or mountains of strawberry ice cream, were decorated with edible “cigarette butts.” (Packs of dry ice, hidden in the center of each, prevented a meltdown.) A playful hostess worked the room, spoon-feeding guests scoops of the stuff. Conceived by Kreëmart, a creative enterprise that allows artists to explore dessert as a medium, in collaboration with top pastry chefs, the confection was an exact replica of one of Cattelan’s provocative photographs, which decorated the walls of the apartment. Boxes of candy cigarettes were strewn pell-mell across the table, and guests, congregating near the installation, were collectively in awe.

“The cake and the cigarettes are my favorite part,” said Marilyn Minter. “Whatever Kreëmart does, it’s very cool. And tasty.”

Toilet Paper, the biannual photo zine born in 2010 as the brainchild of Cattelan and photographer Pierpaolo Ferrari, had an “avid fan” in Dennis Freedman, who worked with the artists to publish the new book — a compilation of its five issues — on his imprint, Freedman/Damiani. The three met while working together on one of W magazine’s art issues during Freedman’s run as creative director there.

“I started an imprint, and I said to Maurizio, ‘Why don’t we do a book?’ ” said Freedman, now the creative director of Barneys New York. “What’s so brilliant about Maurizio’s images is that they create this world — a world of his own — that does this very thing. What first appears sometimes squeamish, later becomes hysterically funny. And some things which you think are funny become really disturbing.

“For someone who has a kind of nonstop hyperthyroid subconscious that’s a little hard to keep under control, when I work with Maurizio, it’s kind of like adding another engine to the chaos,” he continued.

Bill Powers, who snagged a signed copy before jetting off to meet wife, Cynthia Rowley, for dinner, was all laughs about the cancellation of Bravo’s reality-competition show, “Work of Art: The Next Great Artist,” of which he was a judge for two seasons.

“I went to Andy Cohen’s Christmas party on Saturday night, and I told him that I would be coming as the Ghost of Bravo Past,” he said.

Cattelan, the celebrated guest of honor, seemed bashful as the recipient of so much attention.

“You can never have enough toilet paper,” he deadpanned.