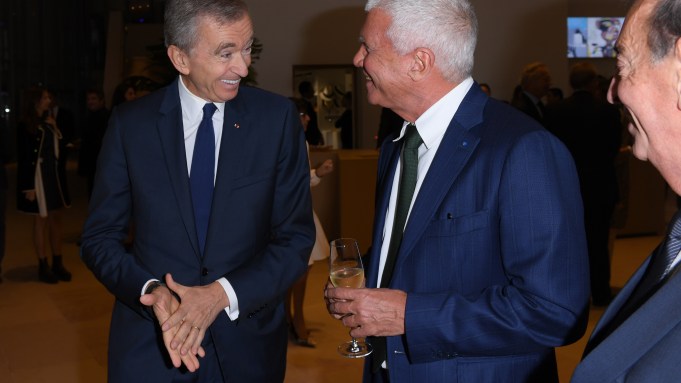 PARIS — Art world heavy-hitters gathered at the Louis Vuitton Foundation on the penultimate night of Paris Fashion Week for a preview of the highly anticipated Jean-Michel Basquiat and Egon Schiele exhibitions, which opened on Wednesday and run concurrently until Jan. 14.

Joining Bernard Arnault, chairman and chief executive officer of LVMH Moët Hennessy Louis Vuitton, were gallerists Larry Gagosian; Jérôme de Noirmont; and Tony Shafrazi, who brought Owen Wilson as his guest; artists including Annette Messager and Christian Boltanski, and collectors such as Peter Brant, Philip Niarchos and Dimitri Mavrommatis, who lent their works for the exhibition.

“Of course, the best one here is mine. Did you see it? It’s the first one when you come in,” said Peter Marino as he perused the buffet table in the auditorium of the foundation. “When Arnault asks you to loan something, you loan it. Nobody even knew that I had it except for him.”

Marino, who designs stores for LVMH brands including Louis Vuitton, Dior, Bulgari and Hublot, bought three Basquiat paintings in the Eighties. “This was the first one I ever had and I paid nothing — but it wasn’t such a big deal back then,” he recalled. “It’s so impressive what they put together: 120 works — wow!”

He let slip that Brant would be bringing a portion of the exhibition to New York in March 2019. “He’ll be opening his own foundation in New York,” said Marino, who plans to open an art foundation of his own in Southampton, in an 8,000-square-foot house designed by R.H. Robertson that currently houses a Bed Bath & Beyond store.

“New York is obviously very, very crowded. I think I can make a little bit more of a difference there and I’m interested in having kids out there see art,” he explained. “When I grew up in New York, you were supposed to go to art shows even if you were athletic. It wasn’t a reserved world for artistic type people like it is now.”

Yusaku Maezawa, the billionaire founder of Japanese e-commerce site Zozotown, peeled open his jacket to show off a shirt with a Basquiat skull painting similar to the one he bought at auction last year for a record $110.5 million. Basquiat’s sisters Jeanine and Lisane, the co-administrators of the artist’s estate, also attended.