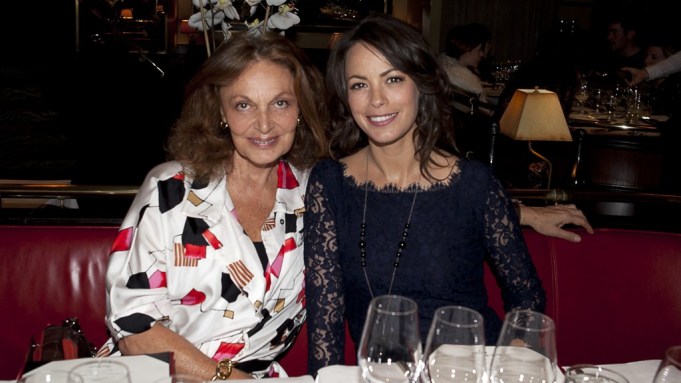 “Harvey [Weinstein] sometimes asks me to help out with his movies,” Diane von Furstenberg said from halfway up the carpeted steps toward the back of the Monkey Bar in Manhattan on Monday afternoon. “Especially, it seems, if they are Holocaust or French movies. Apparently that’s my métier.”

Von Furstenberg joined Weinstein and George Stevens Jr. to co-host a luncheon for “The Artist,” the silent, black-and-white film that The Weinstein Co. is maneuvering toward Oscar glory with steadily heightening buzz. Guests at the midday luncheon, who included Geoffrey Fletcher, Jean Doumanian, James Toback, Carol Kane and Candice Bergen, were invited to swill Dom Pérignon, eat grilled salmon or bacon-wrapped pork loin and “celebrate the power of creation.”

“Well, I just loved the movie, that’s all,” von Furstenberg went on. “It’s beautiful and brilliant and it’s happy and it’s sad and sweet and you really feel it.”

Someone nearby added that it was charming.

Linda Fargo agreed, telling table mates Thomas Langmann and Bérénice Bejo — who produced and starred in the film, respectively — that “it was really so brave…to do a silent film, and it was so unexpectedly modern.” Bejo beamed, and beckoned the film’s director, her husband Michel Hazanavicius, over.

“They’re talking about you,” Bejo said.

“About how crazy it is to do a black-and-white silent film?” Hazanavicius replied, laughing.

“Oh, I have no dance experience,” Bejo laughed. “It took me five months to learn how to do that. And I don’t know if I could again. The last scene was about 17 takes.”

Dujardin plopped down on the curved red leather banquette after the appetizer was cleared.

“Everyone is in love with you after this film, but you know that,” von Furstenberg intoned in French, in his direction.

“Even without the moustache?” Dujardin grinned back.

For all the love, there was one cast member missing from the festivities who would have very much enjoyed the bacon-wrapped pork loin.

“I wish the dog was here,” von Furstenberg said in reference to the on-screen pair’s co-star, an impeccably trained Jack Russell terrier. “That’s what Barry [Diller] said, too. I said, ‘Barry, I’m having a lunch for ‘The Artist’ tomorrow, do you want to come?’ and he said, ‘Only if the dog is there.’”