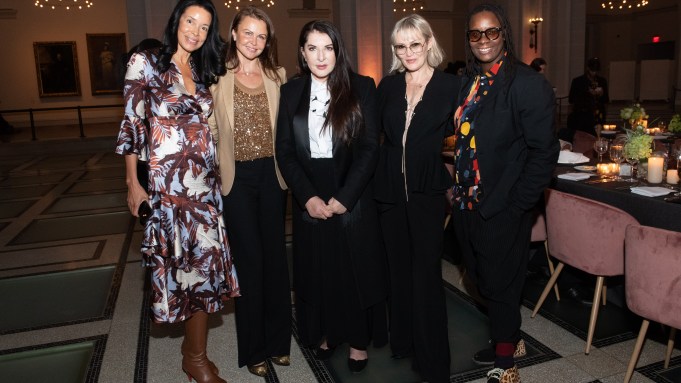 As If magazine’s event on Wednesday offered guests some food for thought before dinner was served: the first installment of its speaker series, launched with Audemars Piguet.

“It’s our duty to deliver real estate in the magazine to art,” said As If editor in chief and cofounder Tatijana Shoan, adding that support of the arts isn’t limited to the publication’s glossy pages.

Shoan was preaching to the converted, but her message reached a whole other level since the venue was the Brooklyn Museum. Moderated by András Szántó, Audemars’ art adviser, the museum’s director Ann Pasternak and prolific and outspoken artist Mickalene Thomas let loose on issues such as the patriarchal nature of the art world.

“Corporations want to take advantage of artists,” said Thomas. “Some don’t want to work with people of color and women. Especially if it’s a six-figure [campaign], it’s a white male like Jeff Koons, who is so used and saturated.”

The large-format, biannual As If published a 26-page story about Thomas, whose work encompasses paintings, installations, collages, photographs, film and video and sculptures. During the conversation with Pasternak, Thomas mentioned her handbag design for Dior‘s capsule collection bowing in Miami on Dec. 4, in time for Art Basel Miami Beach.

“Oh yeah, absolutely I’d like to work more with Dior,” said Thomas. “There are a few brands I would collaborate with…Gucci is one. I actually designed a dress that I would love to continue. I’d love to design other dresses and more ready-to-wear or even couture.

“I collaborated with Brother Vellies before [creative director] Aurora James was chosen for the CFDA/Vogue [Fashion Fund mentorship program],” said Thomas, pointing to her shoes. “The big brands are stuck in the old ways of thinking. Jeff Koons, to me, is not a creative risk. I have respect for his work as an artist, but how about taking a risk with an emerging artist or an artist like myself with really great ideas. When will those brands shift their paradigm and do something other than what’s expected of them?”

Thanks to some slight of hand by the caterer, two long linen-covered tables with dense floral arrangements appeared as if by magic on the glass tiled floor of the majestic Beaux-Arts Court, which was empty when cocktails were served along the perimeter an hour earlier.

“I’m so jet-lagged,” moaned Marina Abramovic. “I have Lyme disease.” The artist said she’s directing an opera, “The Seven Deaths,” with seven costumes designed by Riccardo Tisci. It will have its premiere in Munich in 2020, then travel to Paris and other European cities. “We’re working on coming to New York,” Abramovic said. “It’s the first opera I’m directing and playing.” As the title suggests, there will be violent ends for some — strangulation, suffocation and drowning.

Antonio Seward, chief executive officer of Audemars Piguet, revealed the genesis of the event. “We were talking about the speaker series and doing it at a cultural institution,” he said. “We thought we’d bring Anne Pasternak to AP House, [the brand’s venue for entertaining guests]. Anne said, ‘Why don’t you come to my house.’ We’re a very traditional house, we respect our know-how and savoir fare, but we take risks when it comes to design.”

“Audemars Piguet supports the arts and uses the brand’s DNA to do what’s right. You should see what they do at Art Basel,” said As If publisher and cofounder, Scott Fishkind, referring to large-scale exhibitions such as the upcoming “Halo” by Semiconductor, and Quayola’s “Remains: Vallee de Joux” computer-generated paintings made up of millions of points.