Luxury boutique Just One Eye celebrated its collaboration with The Row and Damien Hirst. 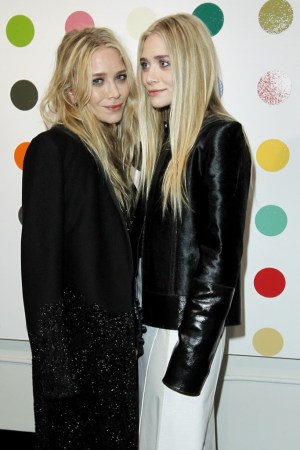 Anyone who thinks Los Angeles has lost its edge isn’t spending time in certain parts of Hollywood. Wednesday night was a study in contrast between grit and glam as six-month-old luxury boutique Just One Eye, located in Howard Hughes’ former office building, celebrated its collaboration with The Row and Damien Hirst one block away from a soup kitchen with its many patrons lining the sidewalk.

A black-clad crowd, many just back from Art Basel Miami, gathered in the gallerylike space to ogle The Row’s 12 Nile crocodile backpacks, each hand-painted and signed by Hirst and perched on its own glass-covered pedestal.

“I get first dibs on one of these, right?” quipped Stavros Niarchos with the store’s manager. Indeed, some customers, like artist Tsipi Mani, preordered and wore their bags at the party. Others, like Hedi Gores, bid white-gloved shop clerks to lift the glass cubes covering the bags so they could try them out for size.

The luxe art project, the brainchild of Just One Eye owner Paola Russo, has elevated the status bags to another stratosphere (though its retail price has been long under wraps, all bag styles are now listed as going for $55,000 on the Just One Eye ecommerce site) and set the bar high for Russo, who is at work on a Converse collaboration with another artist. Several bags have already been sold.

Halfway through the event, The Row’s Mary-Kate and Ashley Olsen appeared, eager to greet friends and sip cocktails.

“We started this project a year ago, so it’s nice to finally get to celebrate with people,” said Mary-Kate, who said she’d be “forever grateful” to Russo for choosing The Row as the first brand carried in Just One Eye. “She has a vision, we have a vision. It’s great that we came together,” she said.

While Ashley said that there were no plans for another collaboration at the moment, she had business on the brain, since the duo had just finished a customer event at Neiman Marcus the day before. “We’re about to shoot our pre-fall look book, do sales, and then in February, we have our fall show again,” she said, adding, “I’m really ready for Christmas, which I’ll be spending at home with my family.”