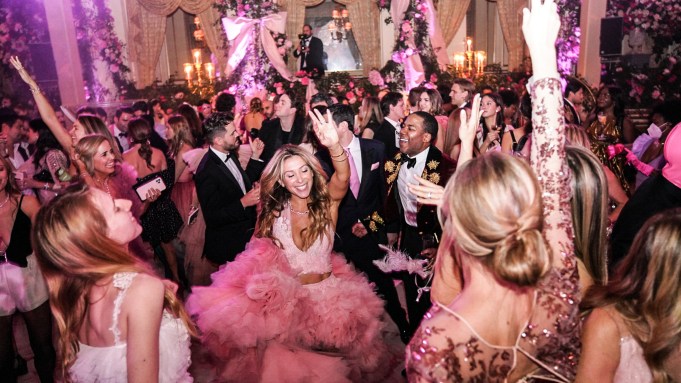 On Saturday night, designer Rebecca Hessel Cohen celebrated her 40th birthday with an over-the-top soiree at the Plaza Hotel fit for a LoveShackFancy queen.

Guests, including Lili and Howard W. Buffett, Serguelen Mariano, Stephanie Nass and Asia Monet, were greeted by servers outfitted in Regency-era costumes at the bottom of the hotel’s ballroom staircase. Those in need of a last-minute accessory were offered their choice from platters of lace gloves and adorned masks — the masquerade kind — on their way to the main event.

“My birthday is the day after Valentine’s Day, so we wanted to celebrate love, life and all things beautiful,” said Cohen, the train of her pink tulle gown floating behind her as she made her way through the pink-hued room. Large pink balloons dotted the ceiling, pink ribbons trailing toward the ground. “It’s Valentine’s meets Versailles. It’s a little naughty — LoveShack gone bad. Effortlessly imperfect in a perfect way.”

During cocktail hour, the crowd — women outfitted in frothy LoveShackFancy, and men in classic tuxedos — sipped cocktails as a violinist on stilts performed covers of pop songs. The room’s centerpiece, a decadent desert table featuring an overgrown floral installation by Lewis Miller, hinted at what awaited the crowd behind the mirrored ballroom doors. “I wanted a dinner, but no one wants to sit at a dinner,” added Cohen. “Everyone wants to dance.”

Inside the grand space, pink LoveShackFancy lampshades adorned every light, the brand’s signature bows were scaled up to giant proportions and hung from the walls, and pink adorned every surface from the projected dance floor to the plush vintage lounge areas. Performers were outfitted in the new LoveShackFancy soiree collection, and an installation of cakes in the room — some real, some faux — would later be repurposed as decor for LoveShackFancy boutiques.

“Apparently it’s not what they usually do here,” said Cohen as she surveyed the extravagant space, adding that her personal frame of reference only included CR fashion week parties and Bat Mitzvahs from back in the day.

Cohen, in close collaboration with Miller — who designed the florals for Cohen’s wedding over a decade ago — had transformed the Plaza into a LoveShackFancy wonderland with a three-week lead time. Miller described his floral approach as “French garden gone bad.”

“The whole idea was to make it feel like we’re in Paris, but not. It’s at the Plaza, it’s iconic, and it needed to feel not stuffy and not too precious,” he added. “We rolled in with a couple trucks of foliage and flowers and a small army of people and just hosed the place down.”

For those who missed the lavish fete, you’re in luck: Cohen promised to make the event an annual affair.