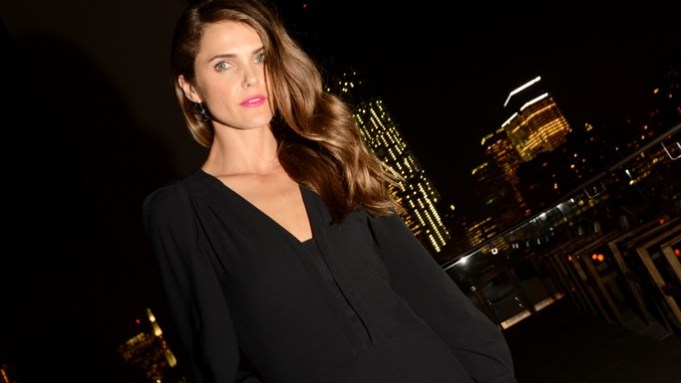 Jerusha Hess stepped off the red carpet after posing with Keri Russell, Jennifer Coolidge and J.J. Feild at the Cinema Society- and Alice + Olivia-hosted premiere of her new movie “Austenland” at New York City’s Landmark Sunshine Theater on Monday night. “I much prefer talking to smiling,” she sighed. Hess, who cowrote “Napoleon Dynamite,” made her directorial debut with the new film, based on the 2007 novel by Shannon Hale, which stars Russell as a thirtysomething woman so obsessed with “Pride and Prejudice” that she spends her life savings traveling to a Jane Austen theme park in London in search of her perfect Mr. Darcy.

“We made it with the intent of poking fun at the [Jane Austen] aficionados, but also knowing they are our number-one fans,” Hess said. “We had to toe the line.”

Producer Stephenie Meyer, author of the best-selling “Twilight” series, knew a thing or two about fandom and obsession before signing onto the film. “I think that’s one of the reasons it appealed to me,” she said. “I had the really intimate experience of seeing how much [readers] want to live out the fantasy. If there was a Twilightland, those people would be lining up in droves to go.”

Coolidge, who plays a fellow guest at Austenland in the film, showed her curves in a formfitting Cavalli number and wore diamond rings on every finger. She was eager to share her feelings on the subject of modern romance. “Men ask out women and say, ‘I’d like to take you to a movie,’ and then they take you to ‘Iron Man,’” she said with an eye-roll. “Why wouldn’t they take you to ‘Austenland,’ and then they might actually get some, you know? I mean, hey, I love Robert Downey Jr., but I don’t know why more guys don’t do that. You gotta play the game.”

One wondered if she ever had a Mr. Darcy-esque romantic fantasy of her own. “I lived in New York City, and Alec Baldwin used to run around the park, so I had my Alec Baldwin days. Then when I saw ‘Thelma and Louise,’ I thought Brad Pitt was the hottest thing I’d ever seen in my life. The guy from ‘The Hunt,’ Mads Mikkelsen, is beautiful. And I’ve always loved Billy Crudup. I like a man who can introduce me to new music. And I like a man who loves animals. Blow me off to take care of your dog.”

Russell got a kick out of working with Coolidge. “When you shoot with [Coolidge], you just kind of hang on for dear life and try not to f–k up her scene by laughing too much,” she said.

After the film, guests like Alex Lundqvist, Alvin Valley and Tom Bernard cabbed it to SoHo for an after party at Jimmy at the James Hotel, noshing on miniature burgers and Qui cocktails near the pool while the DJ played several songs from the film’s soundtrack (including Nelly’s hit “Hot in Herre,” which made a memorable cameo). Stacey Bendet was introducing artist and model Langley Fox Hemingway to friends as her “adopted little sister.” The two revealed that they have plans to collaborate on a jewelry project. “We’re going to use the 3-D printing company Shapeways and discover from there,” Fox Hemingway said.

Aleksa Palladino thought the film was hilarious, despite not being quite up to speed on her Jane Austen. “I went to a really strange high school [the Beekman School], and we studied existentialism for three years. There were like, 60 kids in the whole school. We read other things, but we didn’t read Austen. We read a lot of [Jean-Paul] Sartre, a lot of Paul Bowles.”