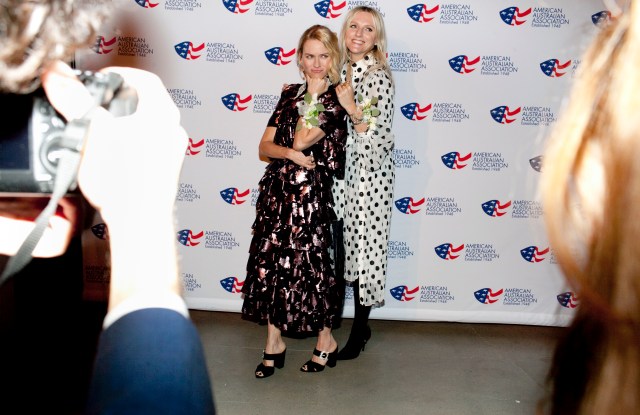 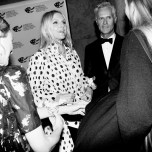 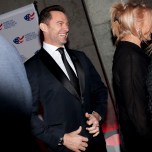 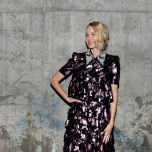 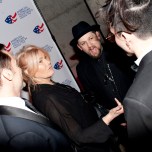 Despite a reputation for being a more casual bunch, New York’s glitziest Australians brought out their black tie Friday evening for the American Australian Association’s inaugural Australia Day Arts Awards, which honored Naomi Watts and InStyle editor in chief Laura Brown, along with upcoming Aussie band Chase Atlantic. And yes, there were koala corsages.

“We don’t dress for the beach every day. We love to spruce up for a special occasion,” Watts said, disputing the reputation. “I heard it was black tie, but I didn’t take that too literal. I’m not wearing a ballgown. I tend to dress casually pretty much all the time. With kids, I’m always in and out the door very quickly. I don’t really do boots much in Australia and living in New York with seasons you always do that…boots, hats, scarves and overcoats.”

The actress was just in from Sundance, where she was, yes, bundled up in boots to promote her film “Ophelia.” “I didn’t [get to see other films] because literally it was one day of press and then I had to get back to the kids. I was there working from 6 a.m. ’til midnight,” she said, noting that the festival had a more socially conscious feel to it this year.

“There’s definitely a focus on women right now and it seems Sundance is a great festival in that they do have a lot of female directors already,” she said.

Of the Australia Day Arts award, Watts noted it is “great that the association between America and Australia is so strong and there’s a great respect there and a good cultural exchange with all these scholarships that they keep granting. Anything you can do to encourage people who are at the beginning of their careers, it’s a good incentive.”

Other guests included the patriotic Hugh Jackman and his wife, Deborra-lee Furness, and Katie Couric.

Brown arrived after her co-honoree and promptly brought out a corsage with a small stuffed koala clipped onto it. The two posed prom-style at the step and repeat, showing off the accessory.

“We kind of have a little pod of Aussies here, and they called up and were like, ‘We’d like to give you an award.’ And I was like, ‘On the same night as Naomi, are you kidding me?’ I’m so honored and so flattered,” Brown said. “I’m like, ‘Oh OK, maybe I’m at the age where one starts to get awards. I’m no longer 28.’ I told Naomi I was making koala corsages and I was like, ‘No, I’m not kidding, this is not a joke.’”

The honor came at the end of a rather busy week for the editor, after the unveiling of InStyle’s Oprah Winfrey cover story drew quite the media frenzy.

“I know, it’s been a bit overstimulating. It’s funny, I always end up in random places and countries when I’m breaking a big story,” she said of the Oprah cover. “We broke it when I was in Paris at like 2:30 in the afternoon and then I had to get on the plane where we didn’t have any email for eight hours. I said to my web team, ‘Please don’t break anything!’ My September cover, when I broke that I was in Tanzania.”

She can finally exhale now that the story is out. “You’re just sitting with stuff on your phone, like images, and you’re like ‘please let them go out into the world!” she said.

Brown was introduced onstage by Couric. “I love Australians — every last one of them,” Couric deadpanned ahead of dinner. She and Brown have known each other for about two years, after meeting via Instagram. “She and my husband recognized each other at a restaurant, and they just started talking, and he said, ‘Aren’t you that funny woman I follow on Instagram?’” Couric said. “Isn’t that random? Instagram brought us together. One of the plus sides of social media.”

The band Chase Atlantic, comprised of brothers Mitchel and Clinton Cave and friend Christian Anthony, were recognized with the “AAA Rising Star Award.”

“We’re flying to Boise to start our tour,” Mitchel said. “We’ve never been before. One of the legends tells us that we’ve got to start in Boise,” he added jokingly.

Joel Madden then stepped in to provide some background.

“We met a few years ago in Australia, and our company signed the band and we’ve been working with them for a few years. And now they’re kind of coming up in the world,” Madden continued. “I’m extremely impressed with their ability to create their music and their art and their talent. And they’re good-looking guys.”

With that, guests made their way to their seats, a didgeridoo providing ambience.