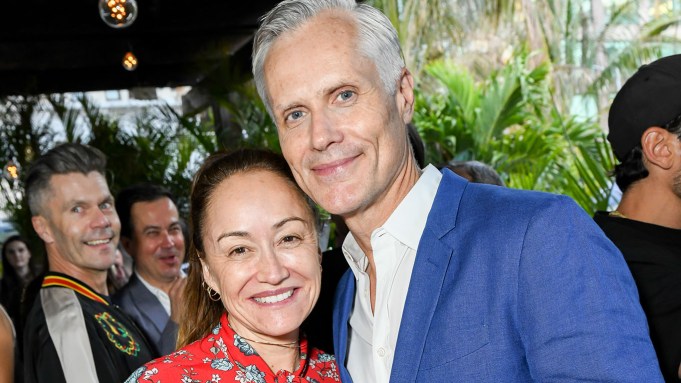 NEW YORK — From a distance, Tuesday night’s party in SoHo’s Gitano Garden of Love seemed like a reunion for all of New York’s Australian fashion community. Old friends catching up over brightly colored margaritas while snapping selfies of each other under oversize coconut palms and other tropical plants.

But the event marked a bigger occasion: the 10th anniversary of the Australian Fashion Foundation, the nonprofit that helps emerging Australian fashion and media professionals find work abroad.

“Aussies tend to seek each other out,” Julie Anne Quay, cofounder of the foundation, told WWD.

Quay and Malcolm Carfrae, both native Australians, are a perfect example. The duo met in New York, through the “Aussie family,” or network, years ago. Both had come to New York — Carfrae by way of London — for their shot at a career in fashion. Carfrae worked for Calvin Klein back in 2003 before going on to Ralph Lauren and later founding his own consulting firm. Quay arrived 10 years earlier with her husband. She began her international fashion career at V Magazine, later founding VFILES, a fashion and media company, in 2012.

One thing they both found was how hard it was to make connections in the industry — especially as foreigners. Quay said people often couldn’t understand her accent.

“I was like, ‘What are you talking about? I’m speaking English,'” she recalled.

Still, they both considered themselves among the lucky few Australians to even be in New York, one of the fashion capitals of the world.

“When you’re a student in Australia and you study fashion it’s impossible to get support with internships internationally,” Carfrae said. “It’s just so far away. And you can’t just call someone and get an interview.”

That, added to the fact that most fashion companies are in cities halfway around the world, in places like New York, London, Paris and Milan, makes a career in fashion seem next to impossible.

That’s why the pair decided to start the Australian Fashion Foundation, to help up-and-coming Australian students compete globally. Each year, the nonprofit awards two Australian students in creative fields — including fashion, design, styling and media — with a $20,000 scholarship and places them in an internship in a major metropolitan city in the U.S. or Europe. So far 20 students have been placed in New York, Paris and London at companies like Calvin Klein, Diane von Furstenberg, LVMH Moët Hennessy Louis Vuitton and Alexander McQueen. Carfrae said many of the students are offered full-time jobs after their internships are over.

Like Mikala Tavener Hanks, who interned at Proenza Schouler last summer. The 2018 winner and Sydney native, who showed up to Tuesday’s party in a Proenza blazer and skirt, recently started working for fashion label Monse.

“[The Australian Fashion Foundation has] completely opened doors for me in terms of getting me connected with people in the industry and connecting me with other people,” Hanks said.

It was at Proenza that she learned how to source fabrics, met industry leaders and was even backstage before fashion shows, helping dress the models.

“Working that day on pieces and actually seeing them on the runway completely changed my perspective; it’s given me a fresh approach,” Hanks said. “I could definitely see myself returning home and bringing that fast-paced American, can-do attitude back to the Australian industry.”

As a designer, being exposed to different markets and understanding how customers around the globe shop, is after all, essential to the job, according to Australian fashion designer Dion Lee.

Lee, a Sydney native, relocated to the Big Apple four years ago. But he said being so far removed from the rest of the world at the beginning of his career was challenging.

“There wasn’t any initiative like this when I graduated and I think that’s why I kind of wanted to support [the Australian Fashion Foundation] and be involved,” said Lee, who also helps select the winners each year.

Ticket sales for the event, along with a raffle, help cover the costs of the foundation’s two annual parties, one in New York in June and the other in Sydney every December. Tuesday night’s event was also sponsored by the American Australian Association and Bird in Hand, an Australian winery.

Carfrae said he hopes to expand the program to more than two recipients in the future. And it’s a way for Aussies to stay connected while so far away from home.

“The Australian community is so loyal,” said Nicole Warne, who was sporting a dress by Dion Lee. “We’ve got to stick together in New York. It’s a tough city.”