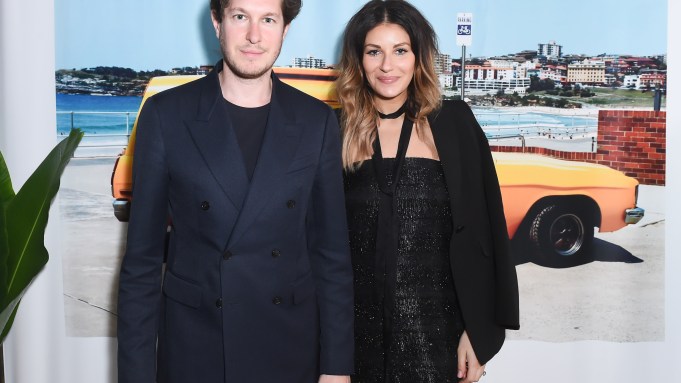 “I’d rather be on Bondi beach today — even though it’s winter there now,” exclaimed a dewy guest Tuesday at the Australian Fashion Foundation’s 9th Annual Summer Party in New York, which was held in partnership with The Woolmark Company. As the thermometer in Midtown Manhattan soared to 94 degrees, flocks of Aussies and Americans alike packed tightly into the Whitby Hotel’s lobby bar to toast the continent’s top new talent.

“Australia is very relaxed and optimistic,” remarked Nicky Zimmermann, who with her sister Simone Zimmermann operates their Sydney-based label, which has 25 boutiques worldwide. “It comes through in making it different from European brands.”

That laid-back, beach-inspired sensibility was reflected in the light and airy outfits donned by many of the Down Under celebrants who were jockeying for a glass of rosé from the harried staff in the Whitby’s dimly-lit main floor bar.

“We love having stores in places where we want to be,” continued Nicky Zimmermann, who serves as the brand’s creative head. “The minute we went to the Hamptons we saw the girls that are there and we thought this is perfect. We instantly knew the type of girl in the Hamptons and we felt right at home, too. It’s really a special place to New Yorkers.”

Tucked away from the room’s surging nexus sat stylist Christine Centenera, who donned a velvet black and blue dress from fellow Aussie Dion Lee’s forthcoming fall collection. “If you look at successful brands out of Australia they all speak to that relaxed lifestyle,” she observed.

Centenera relocated from Sydney to New York last year, but has long been working Stateside in creative collaborations with Americans like Kanye West. “It’s been about nine years [that Kanye and I have worked together],” she continued. “He’s taught me that anything is possible. He’s someone who loves to create and never takes no for an answer and really pushes himself. That’s quite incredible to watch.”

Across the room, Dion Lee — who also relocated to New York a year ago — waited patiently to order a vodka and soda from a frenzied barkeep. “Australian designers have a fairly confident use of color, but I think they have that in common with the Americans as well. The lifestyle outside in Australia and things like the beach inspire a more resort color palette.”

According to brother and sister design duo Camilla Freeman-Topper and Marc Freeman, whose family-run label borrows from each of their first names, color is perceived differently in Australia given the country’s intense sun.

“It is so bright — especially in summer, but softer tones are easier to digest,” said Camilla Freeman standing beside a mammoth print of a brightly hued school bus yellow station wagon from the Seventies.

“Because we’re such a young country we have no rules in the sense that we don’t come from a heritage French luxury house that have these lengthy fashion and art and architecture histories,” added the designer. “It allows us to still have fun.”

With that sentiment the pair floated off to have fun in the pool of glowing guests including Malcolm Carfrae, Victoria Lee, Duckie Thot, Beth and Tessa Macgraw and Ajak Deng.